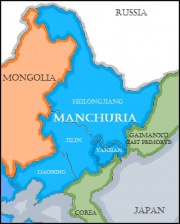 Map of Manchuria and its provinces within Beihanguo.

The Manchurian Autonomous Region (滿洲自治区 Mǎnzhōu Zìzhìqū) consists of northeastern Beihanguo. It is divided into the three provinces of Heilongjiang, Jilin, and Liaoning. There is no word in the Manchu language for "Manchuria": the term in Manchu for this language is still "Dergi Ilan Golo," (Дерги Илан Голо) literally "The Three Eastern Provinces" (東三省, Dōngsānshěng). The capital is Mukden (ᠮᡠᡴᡩᡝᠨ; Мукден) (奉天府; Fèngtiān Fŭ in Mandarin). The region uses both Mandarin and Manchu as official languages, although the majority of Manchuria are Mandarin-monolinguals.

The Japanese Empire has considerable influence in Manchuria, dominating the local economy. Within the Autonomous Region, the Japanese lò is co-legal tender with the Beihan yuan.

After the collapse of the Chinese Empire in the Great Oriental War, Manchuria sought independence along with other new states. However, Australasia feared that an independent Manchuria would return a branch of the former Chinese Imperial Family to power as kings or emperors, and potentially threaten reunification of China. Their desire was thus denied, and they became the three northeastern provinces of Beihanguo.

However, with the rise of Japan in the 70's, northeastern Beihanguo saw a dramatic rise in investments by Japan. Combined with an upwelling of nationalism, some Manchus, still a narrow majority within the region, began to agitate for independence, as an ally of Japan, perhaps within a revived East Asian Federation. This movement reached a peak in the late 70's and early 80's. In 1982, the Beihan legislature approved a referendum in the region on autonomy. With the achievement of autonomy, the nationalist movement declined, though it still exists today.

From the time of autonomy, both Manchu and Chinese were recognized as official languages. Following the creation of the Manchurian Parliament a government program fostering adoption of the Manchurian language was put into place. These programs have now been in place since 1960s, over fifty years, and the third generation of Manchurian students are being raised in either bilingual or monolingual Manchurian homes. The rate of acceptance varies. Among students in Liaoning, there is a lower percentage that speak Manchurian in the home, but that percentage increases the further away from the border with Beihanguo. Still, with the importance of connection to the capital in Xinjing, most Manchurians conduct local government business, and private cultural affairs in Manchurian, and Chinese, otherwise, maintaining their ability to interact and foster trade with the strong markets to the West.

Increased rail connection with Japan may cause a change in the language demographics of the region however. Time will tell.

The population of the region is about 100,000,000, about 50% self-identifying themselves as Manchus, the rest Han Chinese, Japanese, Coreans, Mongols, Russians, and others. It is important to note that the sense of Manchu-ness is not merely based on ancestry and mother tongue alone; many Han Chinese and Mongols, due to the ancient Manchu banner system, consider themselves Manchu as well. The reason for this is that the old Manchu banners, the old Manchu army, have been reorganized by the Qing Dynasty in the 20th century to resemble the Russian Cossacks in appearance and organization, ironic since Qing Dynasty China at that time was pro-German. Northern Han Chinese, Coreans, Mongols, and native tribes were allowed to be enrolled to the banners in large numbers. The result is the increase of people identifying themselves as Manchu merely because they are enrolled in the banners. This caused criticism from some of the older Manchus, who consider the new ones as not really Manchus. Another reason is many Han Chinese in Beihanguo also wish to identify with Manchuria and thus identify themselves as Manchus in the census. However, most Manchus are happy that the Manchu nation is growing in Beihanguo.

There is a Corean Autonomous Prefecture of Yanbian sharing the border with Corea. Though there has been talks of greater autonomy, and even independence, this has been stymied by Russian diplomats, fearing that this independence would turn into an accession to Corea, and thus enlarging the Japanese-controlled land area surrounding the much-contested East Primorye.

Manchuria is also home to numerous European minorities brought to the area during the Qing Dynasty, especially in the city of Harbin. There are pockets of Veneds, Ashkenazi Jews, Volga Germans, Ukrainians, and Russians. In fact, one of the very first 'Russians' in Manchuria was a Vened convert to Orthodoxy, Nikifor Jacsa Niegrynik, who established his own fief with native and Russian subjects that was neither a part of the Qing Empire nor of the Russian Empire for several years. The Russians are the biggest of the European groups in Manchuria, numbering slightly over the 150,000 mark, although the number increases dramatically when Han, Manchu, and Mongol people in Manchuria with Russian ancestry or Russian passport holders that have arrived only after the fall of the SNOR are counted. During the Great Oriental War, they were persecuted by the Chinese government for allegedly being pro-SNORist agents, however, since the postbellum establishment of Beihanguo, this persecution has all but ceased. The Russians and mixed-race, Sino-Russian people, the 'Ā'ěrbājīn' (阿爾巴津人) are credited with spreading the Gospel to many people in northern China. Most of Beihanguo's Orthodox faithful are found in the three autonomous provinces that make up Manchuria and are served by over 20 Orthodox churches, chief of which is the Cathedral of St. Nicholas, once of Manchuria's largest all-wooden buildings. The Vatican sent biritual missionaries to Harbin between the two Great Wars to administer to any Ruthenians in the city and proselytize native Chinese who had a baseline familiarity with Russian culture. As of the 21st Century, the Ruthenian Catholic Exarchate of Harbin has about 1,500 members and only has the church of St. Alexius unders its omophorion (jurisdiction) which French missionaries built during the years 1930-1935. There are also three synagogues for the Jews of the city (two for Ashkenazim and one for the completely sinicized Perso-Jews), three Latin Rite parishes for the Veneds and any Han migrants from other parts of China, a Lutheran church for the Germans and local converts, and a Baptist congregation for much the same.

With continued pro-Japanese views, the province has spent a considerable sum in updating the rail lines to allow for quicker connection to Corea's FastRail-2020 project. It is expected that full High Speed Rail service will allow for citizens of Manchuria to travel into Corea and Japan in ease with the new trains. The first official transit of these trains is expected to begin in 2017. This tighter connection with Japan has not been viewed with great favor in greater Beihanguo.