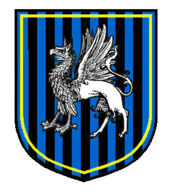 Luc de Mersdon (born 1970) is the younger brother of Duke Haio de Mersdon (a Xliponian) nobleman, as well as being the husband/Prince Consort of Elena I, reigning Queen of Muntenia.

Scion of a truly ancient family in his native land, Luc met his future wife when both were in their early teens. Deposed King Constantin I and his wife, Greek Princess Christiana had relocated to Xliponia in 1973. Both young people showed a keen interest in literature. Elena had begun study to become an attorney when they wed rather suddenly in 1989, when she was twenty and he nineteen, an event that startled observers since many believed a restoration of the House of Cuza eminently possible at that point. Luc, who speaks Romanian with a strong accent, never sought any claim on Muntenian royalty or titles. His public efforts as Prince Consort have been directed towards literacy, education and the expansion of public libraries.

Considerable controversy erupted when Luc and his royal wife named their only child Anira, after the Xliponian Saint Anira. Many viewed this as a sign that his conversion to Eastern Orthodoxy is insincere. Some regard him as an "unwelcome influence" on the Queen and an "alien element" in the monarchy.

The De Mersdons were originally a family of knights from Mersdon, England. The background on their shield dates back to the early Middle Ages when the then-head of the family - Sir Hugh - was cornered, during a battle, between a wide river and a fence which was so high as to be almost impassable. He saved himself by climbing the fence, in armour and all, then taunting his enemies from the other side. He accordingly adopted his coat of arms with seven black fence-posts on a grassy field