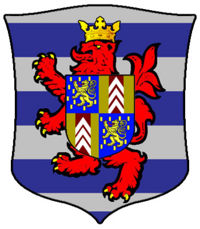 Barry of ten Argent and Azure, a lion rampant Gules, armed, langued and crowned Or [Luxemburg]; on an inescutcheon quartered: first and fourth Azure, billetty Or a lion rampant Or armed and langued Gules crowned Or [Nassau]; second and third Or, on a pale Gules three chevrons Argent [Kastelnow].

The monarch of Luxemburg continues to use the older style, "Her Grand Ducal Highness".

The Grand Dukes of Luxemburg

Prior to Napoleon's accession, the Habsburg Kings of Austro-Dalmatia ruled as Dukes of Luxemburg. Further back, Luxemburg had been ruled by the Burgundians and prior to that, by its native House of Luxemburg, who were Counts of their own territory as well as Kings of Bohemia. 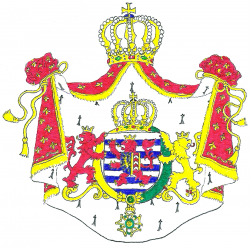 The full achievement of arms, including the robe of estate covered with Napoleon's bees

Napoleon created the Grand Duchy of Luxemburg. After his son was exiled to Andorra, the throne remained vacant as France's new King Louis-Philippe had no legitimate claim to the Grand Duchy. However, the French government continued to administer Luxemburg, much to the chagrin of its inhabitants. Emperor Napoleon III could and did claim the Grand Dukedom, but was himself overthrown in 1870.

The Batavian King William III of the House of Orange-Nassau received the Grand Duchy as a compromise following the Franco-Prussian War. Shortly after, Luxemburg re-joined the Holy Roman Empire.

William died in 1890 without any male heirs, so the throne passed to his nearest collateral male-line relative: Adolph Nassau-Weilburg, the former Duke of Nassau whose territory had been conquered by Prussia. While Grand Duke he used the Jovian form of his name, Aedul, Jovian being the language of high class in Luxemburg. He and his son Wëllem are the same people as the Grand Dukes *here*.

At this point the grand ducal house encounters a POD. Aedul's brother Nikolaus did not marry Natalya, the sexy, artsy, common daughter of Alexandr Pushkin, which *here* barred his offspring from inheriting. Instead he married Annelies, the sexy, artsy heiress to the Princely County of Kastelnow, a Helvetian house that had been disposessed in the French Revolution and never restored. Their lands had been seized by Republicans and then by stronger nobility in the aristocratic counter-revolution of 1804. Annelies was herself a poet and spent her time with the riviera set in Xliponia and the Austrian Littoral. By 1912, when Wëllem II died, Annelies and Nikolaus were also deceased, but their son Andreas (Änder in Luxemburgish) was the heir according to Salic law.

Änder's son Néckel (named for his grandfather Nikolaus) was a powerless Grand Duke, since by then Luxemburg was almost completely run by Prussia. At the end of GW2, the people demanded his abdication, and he complied.

Luxemburgish succession law allowed for female succession in the absence of any agnatic, male-line relatives; this happened *here* in 1912. Néckel had no sons, so his daughter Tréis (Teresa) became the first Grand Duchess - the first sovereign of Luxemburg to be born in the country since Jang the Blind (1296). When Néckel's wife (oops!) became pregnant in exile in 1955, the Diet of Luxemburg quickly established equal primogeniture as the law of succession to avoid a future dispute. Henceforth, the oldest child, of either sex, of the sovereign would inherit the throne. Luxemburg was one of the first monarchies in the world to establish equal primogeniture, and it was seen as a symbol of the country's rapid modernization.

Tréis saw Luxemburg through its most prosperous period. She died in 2005, passing the throne to her daughter Haedrana.

Luxemburg was ruled by the Houses of Bonaparte and Orange-Nassau in the nineteenth century. Grand Duke Aedul was the first of the House of Nassau-Weilburg, a branch of the ancient House of Nassau that had split from the Orange line in the thirteenth century. Grand Duke Änder chose to add the name of Kastelnow, reflecting his mother's Helvetian inheritance, and his son and granddaughter did as well.

Properly speaking, Haedrana should be reckoned of the House of Bourbon, because she is descended from the rulers of Aragon through her father. However, during her lifetime Tréis expressed the opinion that since the throne could now be inherited through the female line, the dynastic name should as well, though she left the final decision up to Haedrana. Haedrana by and large uses her mother's "Nassau-Weilburg-Kastelnow", as it sounds somehow more Luxemburgish: even though no Bourbon kings ever actually ruled Luxemburg, the name brings to mind the 75 years of French rule. Haedrana does occasionally use the Bourbon name, usually "Bourbon-Nassau-Weilburg", especially around relatives on her father's side. Through the Bourbons, she and her younger brother the Count of Arel are in fact male-line descendants of Hugh Capet, founder of the French monarchy.

In the same way, Haedrana's husband, son, and daughter are technically of the Second Houe of Culhuacan, the ruling family of Mejico. It is likely that Andeone will continue to use his mother's name when he becomes Grand Duke, but no one can know for sure.