This flag has been used by supporters of Istrian independence since c. 1998.

Istria is a peninsula on the Adriatic Sea that currently forms a part of Croatia. Istriot is a distinct Romance language related to Venexian and Dalmatian. The Istrian people feel a strong sense of nationhood despite a long history of domination by neighboring countries. Politically, Istria is one more region of conflict and dispute in the very tangled web that is the Balkans.

The linguistic and ethic make up of Istria, *here* mostly Croat with a Slovene minority with a corresponding linguistic make up, is *there* an Istrian (subset of Dalmatian) majority with Croat, Slovenian, and Dalmatian minorities. In addition, as the Danubian Confederation and the CSDS were allied to Italy as part of the victorious Allied Powers in GWII, and given the lack of precedent in the Greek-Turkish "population exchanges", the Istrian exodus did not take place, leaving a large number of Italians in Istria. Taking this into account and the survival *here* of the Istro-Romanian language, a distinct Istrian identity and distinct Italian-Dalmatian influenced language predominates in Istria *there*.

The Dalmatian and Italian influences conspired to help a greater Istrian identity and language survive. A nationalistic movement beginning amongst Istrian intellectuals in late nineteenth century has codified the Istriot language and promoted a strong sense of national identity and cultural unity. In the XXth century this has developed into a intermittent but persistent call for the independence of Istria. An independent Margravate was established briefly in 1918 at the same time as the Principality of Slovenia. Since the breakup of the CSDS, Istria has seen a second upwelling of national feeling.

NK Istra Trst, is a football club in the Dalmatian league whose players and supporters are drawn from the Istriot expatriate community in Dalmatia.

Flag of the NK Istra Trst football club. (See this page for other Croatian sports flags.)

Historically, Istria was divided between the influence of the Republic of Venice and the Holy Roman Empire. Throwing into that mix the influence of the Kingdom of Dalmatia which throughtout the entire mediaeval period controlled everything up to the end of Istria (map4.jpg), the Istrian peninsula *there* has always been more focused toward the west than the east. A Grand Duchy of Istria existed briefly in 1918.

During the time of the CSDS, Istria was part of the Slovenian SR, but had an "autonomous region" status rather like the USSR's national okrugs *here*, or like Kosovo and Vojvodina were in the Serbian SR *here*. This autonomous status made a great deal of sense given the uniqueness of the Istrian cultural identity.

In 1994 (when the CSDS still existed formally), there was an administrative reorganisation. Croatia for various reasons (including an attempt to make themselves look better) gave the Istrian Autonomous Region full republic status, of course with ethnic Croats and various opportunistic ethnic Istrians as the key members of government. The remnants of the CSDS were therefore organised as the Croatian Soviet Republic, the Slovenian Soviet Republic, and the Istrian Soviet Republic, which was in common parlance referred to as the March of Istria.

Croatia's reasoning was logical. With Dalmatia, Sanjak, Serbia and Bulgaria gone, all that was left of the CSDS was Croatia and Slovenia. They must have been aware that Slovenia's secession would only be a matter of time, something to avoid at all cost, as little of Croatia would remain but a small country cut off from the sea. Since the CSDS at the time was nothing but a "Great Croatia", the Croats were able to push through such a reform. They hoped to avoid the state falling apart any further by "federalising" it, and to keep the new statelets under control by appointing pro-Croatian princes and margraves.

By making such a gesture, they hoped to turn the Istrians into allies against the Slovenes; and if Slovenia would declare its independence anyway, it would at least do so without Istria. This was a miscalculation: the move shot Croatia in the foot, Istria being far more likely to agitate for independence that way and certainly not inclined to remain an exclave of Croatia forever.

The pro-independence Istrian Democratic Assembly quickly became the dominant political party in the Istrian parliament. In 1998, the IDA-led parliament unilaterally declared independence, hoping to take advantage of popular support in Italy, Dalmatia, and a few other Western countries. However, they found that popular sympathy did not translate into actual aid. No foreign nation recognized the independent Istrian Republic.

Following the 1999 reform when the CSDS pretense was finally dropped and Croatia became a unitary state, Istria's new status didn't matter anymore. Istria was officially viewed as just another part of Croatia. The Croatians gave up pretending to give regions autonomy and just took over everything. A military action that same year restored Croatian control over Istria's ports, and the IDA fled the country in 2002.

Istria currently is a province of Croatia. A powerless provincial assembly and nominal degree of autonomy provide Istria with a bone Croatia can use to keep them in line until it blows up in their face. Meanwhile, Croatia has thrown its resources into preserving control of the ports. For years, the Istrians have been mounting a slow-burning insurgency like that in Slovenia.

Istria is separated from Croatia proper by Slovenia. Large parts of the declared Principality of Slovenia are operating independently of Croatia, but the Osijek government does place heavy efforts at ensuring a connected stretch of government-controlled territory from Osijek to the ports of Istria.

A political party, the Istrian Democratic Assembly, was formed in the 1990s. As part of its independence manifesto, it has boycotted elections within Istria. Having agitated for greater autonomy, they have considered Istria to be an independent nation since 1998.

The IDA claims the city of Trieste (Trst). It has considered giving up claims to Trieste, with its significant population and economic power, as a concession for Istrian independence from Croatia. This idea is, however, resented amongst radical politicians.

Dalmatia is officially supporting Slovenia, hosting the government in exile and allowing an exception to the no-dual-citizenship rule to ethnic Slovenians. At the same time, Raguza recognizes that some sort of relationship with Croatia is somewhat necessary, and there seems to be an unspoken agreement that Croatia will tolerate the official Dalmatian recognition of Slovenia and pro-Slovene propaganda, so far as that's the extent of it, and Dalmatia doesn't overtly try to push for full Slovene independence. Given this pragmatic (cynical?) view of Raguza, Dalmatia does not give any sort of official recognition to Istrian independence, though popular sentiment is strongly pro-Istrian, and some subtle efforts are being made to undermine the importance of Istria to Croatia, for example by the promotion of Dalmatian and Venetian ports as the main shipping centres, to undermine the importance of Trst.

The Istrian Democratic Assembly has maintained a government-in-exile in Moldova since 2002 under the protection of the then-eleven-year-old King Aurel II, who extended the offer as something of an act of youthful rebellion against his Regent. No sovereign nations, including Moldova, recognize the government, although a few do send limited support. A small handful of individual Italian states officially consider the IDA in Moldova to be the legitimate government of Istria, but such recognition is largely symbolic and has done little to convince Italy as a whole to make that step. Now seventeen, King Aurel remains on good terms with his Istrian guests, who continue to support nationalist agitation in Istria and Croatia.

Croatia will definitely do all it can to prevent Istria from seceding. But that will probably be only a matter of time, anyway, especially with Dalmatia and Italy working for it behind the scenes. 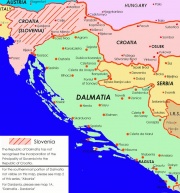 Map of the Balkans including Istria

Territorially, Istria consists of what constitutes *here's* Istria and the western region of Primorje-Gorski Kotar Counties of Croatia and the western part of * here's* Slovenian Istria. Trst/Trieste is part of occupied Slovenia. It is a majority Slovenian rather than Italian town, and it also has an Istrian minority.