Bjørn Erik Gustav Håkansen Honstadt ( b.1819 d.1894) was one of the most famous flag officers in the Solemn League Navy. He won his fame during the days when the NAL was engaged against Dalmatian slave traders off the Guinea coast between 1840 and 1850. He was forever associated with the light frigate TMS Cherokee, when as its skipper he discovered the location of the outlaw slave trading post of Lomboko in 1848. This led directly to the post's destruction and in turn to Austro-Dalmatia's adandonment of the slave trade in 1852.

Born one of four sons (and three daughters) to a carpenter in Casimir, Bjørn was a good student and this persuaded a neighbor to help him take Midshipman exams for the relatively new SLN. At age 14 he was accepted and began service aboard TMS Philadelphia, one of the NAL's new frigates, on the basis of his high scores. He was made a full lieutenant in 1839, at age nineteen and won another promotion in 1846, at the relatively young age of twenty five.

Honstadt was actually a Commander when in charge of the Cherokee on the voyage wherein he tracked a slaver back to Lomboko then managed to capture another slaver to confirm his guess. He was promoted to Captain soon after, which caused some consternation in New Iceland and New Sweden as well as the SR simply because of a difference in military titles. It seemed to some he was actually being demoted. 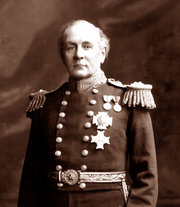 Bjørn Honstadt actually commanded the TMS Covenant for a time and later was selected as Commandant of the Naval Academy in Annapolis. He was President of the Court in the court martial trial of Lt. Commander George Pickett. When he retired from the service at age sixty in 1890 he was asked by his native province to serve as one of New Sweden's Senators in Philadelphia. Not surprisingly, he was selected for the Committee on Naval Affairs.

In 1892, he was elected to the NAL presidency, a mostly honorary position. However, upon the death of General Moderator John S.D. Thompson he assumed that office. His health was fragile, and his term of office was barely a year before his own death. He had enough time to oversee preparations for the election of a new General Moderator.

A famous statue of Honstadt stands in Covenant Square in New Amsterdam.