Born in Halifax, Alba Nuadh, Thompson married Annie Affleck (1845-1913) in 1870 and with her had two sons and three daughters with four other children not surviving infancy. Like many American leaders, he married a strong-willed wife. Her husband was a lawyer called to the New-Scotland Bar in 1865.

Thompson's family life was marred by tragedy. His daughter Annie died at one year of age, while youngest son David lived only to be two. Two of Thompson's other children died at birth (the Thompsons had five children survive childhood).

From 1878 to 1882 John Thompson was Attorney General in the provincial government of Simon H. Holmes. He served briefly as Alba Nuadh premier in 1882 but his government was defeated in that year's election. He was appointed to the Nova Scotia Supreme Court after leaving the provincial legislature. As the end of Rutherford Beauford Fogg's Moderatorship came in 1885, he was quickly became a leading member of the Conservative Democrats. His achievements included the first National Criminal Code and creation of the Continental Coast Guard. 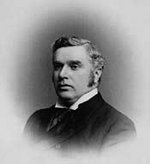 In a carefully counted election, Thompson won and began serving as General Moderator. His administration was cut short when, giving visit to the heads of the Federated Kingdoms Sir John Thompson died suddenly of a heart attack at the age of 48 on December 12, 1893, at Windsor Castle, where the Queen had just invited him to her Privy Council.

He was buried in the Holy Cross Cemetery, Halifax, Alba Nuadh after an elaborate funeral in England staged by the Queen.

Retrieved from "http://ib.frath.net/w/John_Sparrow_David_Thompson"
Category: General Moderators of the NAL