Would it be better for the government to be SNORist? SNOR put a great deal of emphasis on the religion, whereas communism did not.

JS: I had always envisioned it as socialist, so switching to SNORism would be a stretch. However, it might be more plausible. I will have to think about this.

Both are possible, if you ask me. Dan is right: a snorist regime is likelier to put much emphasis on religion than a communist one, but that does not mean that any communist regime is atheist by definition. Besides, I pretty much like the idea of a state where communism has reached perfection. And who says that Greek Orthodoxy is more in N.E. than just a "state religion in name"? As long as you realise that there is no Soviet Union to back it up...
BTW Jesse, here's a suggestion. I saw that you already created a user name (User:Jaspax). Please make sure that you are logged in whenever you work in the wiki: that way it's easier for us moderators to distinguish between you and some possible spammer being at work here. It has also the advantage that you can sign your messages by typing ~~~ for your user name only, and ~~~~ for your user name with time stamp.
Cheers, --IJzeren Jan 00:32, 10 Apr 2005 (PDT)

I'm curious, Looking at the flag, is Nea Illenicia supposed to be communist instead of simply socialist? -- Doobieous

I think in the new map Nea Illenica is too large; it would include Buenos Aires (Bons Ortages) that is clearly set as a capital of Riu de l'Argent if it was of this size. As well, this area would require many original settlers, and I don't think that according to history there would have been so many settlers who had fled Greece. I would suggest that Nea Illenica would be less to the north and south and less inland, mostly on the coastal settlements. Another suggestion which might be better would be that Nea Illenica would be souther, on the coast between Araucania and Patagonia and Riu de l'Argent. This way the mentioning in the history section that the independence of Nea Illenica was helped by the Araucania and Patagonia would be more plausible. Abdul-aziz 02:54, 15 April 2006 (PDT) 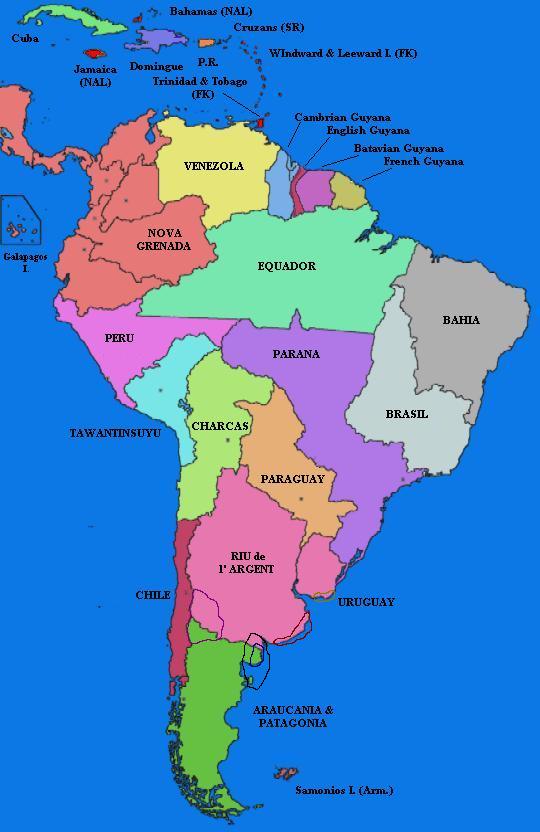 Some more suggestions here. I like the black bordered one as it would also explain why Araucania and Patagonia wanted it independent as it would take much coastline from the country (Peninsula Valdes could be included or not). The purple-bordered suggestion (inland one) is also good in my opinion, as it would explain why the Greeks settled in one place - maybe the king of Aragon used them in order to settle otherwise unsettled regions away from coast, northern Patagonia and such, as well bordering Chile which, as I understand, was a Castillian colony. But it might be QSS tat it is on coast; if not then there are several more possible inland proposals, including one that is more south (and probably would have been a disputed territory between Araucania and Patagonia and Riu de L'Argent before as it would kind of penetratre into the A&P territory if belonging to Riu de L'Argent) or one that extends through most of Chilean boundary. Abdul-aziz 03:11, 15 April 2006 (PDT)

This is what I got from Jesse Bangs; Can we work up a proposal map on this? (Anyone's welcome...I won't get to it until I'm through with finals....

I have not been able to solidify NI as much as I'd like online, though I have quite a few ideas that have never been put down formally. I shall have to look up the wiki shortly. BoArthur 18:42, 17 April 2006 (PDT)

Did I hear Makeover

This page needs to be completely redone, besides the fact this page is unknowledgeable on Greek culture and justs masks it by saying it blended with Spanish culture, religious socialism? Come on. I vote for a remake of this page, maybe then we can finally figure out where it truly is. Misterxeight 01:42, 4 July 2008 (UTC)

NI is actually one of my favorite countries in IB! I think the unique blends that you mentioned really show the possibilities of a fictional world. The Greek-Aragonese connection is explained by the people's history, and the religious socialism comes from a single ideologue who started a movement: nothing implausible about that, especially in Latin America, which *here* is both very religious and rather leftist. It's too bad that there are so many lingering questions (starting with, where is it?), but what's there is definitely QSS. Benkarnell 03:27, 4 July 2008 (UTC)

How did a country of wannabees who aren't even good ones at that become QSS?

One thing you will need to get used to if you are to contribute to IB is that not every proposal will fit with what you consider to be good. People have varying opinions and you will need to respect them. AS for the makeover, you can propose to add elements but whats already there needs to stay. --Marc Pasquin 14:49, 4 July 2008 (UTC)

I do agree with Marc, Mister Xeight; I have no problems with you 'making over' Nea Illenicia, but it does have to remain within the frame-work that was set up when it was created. You have to work under the same rules I had to work under in creating Louisianne...QSS applies across the board, but it makes for some fun creative exercises, if you're willing to work within the constraints. If you can add what you esteem to be "correct" Greek Culture into the Greco-Aragonese blend that is Nea Illenicia, I could be okay with it. BoArthur 15:46, 5 July 2008 (UTC)

I will also point out that here in the real world, religion and socialism are by no means incompatible. Quite the opposite, in fact. Such can be viewed as the cornerstone of Liberation Theology. Just as there are atheist conservatives, gay and black republicans, female anti-feminists, etc. One of my favorite science fiction authors (Orson Scott Card) is a devout Mormon and a firm Socialist. Anyway, IB is a joint project and we all have to make do with QSS. One of my own achievements (of which I'm rather proud) was to explain why on earth anyone in IB would crash a couple of airships into the World Trade Towers on 9/11. I mean, really, there was nothing analogous in the two world situations. Yet I "found" an explanation that met general approval without changing anything that was already known. To me, that is part of the fun. Zahir 17:23, 5 July 2008 (UTC)

I guess I could work within limits, anyone opposed to recent Greek immigrants? Misterxeight 22:50, 5 July 2008 (UTC)

You guess? ;)) Now, I think the idea of recent immigrants from Greece to Nea Illenicia could be very interesting indeed! Not so many that they overwhelm the natives, but enough that they themselves don't become easily lost right away. I'm sure they would be seen as foreign as anybody, since the Illenicians have had centuries to evolve along their own cultural path. I think you've got the makings of some interesting cultural angst and strife. Old Ibero-Hellenes v. newly arrived Greeks. Culture clash. Late medieval Greek culture as captured by the Illenicians and transported to Iberia thence to South America seen through the eyes of modern Greeks -- modern Greek culture as seen through the eyes of people who haven't actually been "Greek" since the 15th century or so! I think you've got your work cut out for you, and if you do justice to both the modern Greek immigrants and the existing Illenicians, this will I think be one of IB's lustrous jewels. So, in my opinion, go for it! Just keep in mind that what we know of Illenicia is QSS and you have to work with that. And that will be part of the fun! Elemtilas 03:02, 6 July 2008 (UTC)

We need to figure out where this is. There's a jut of land in here's Argentina that's of reasonable size. Maybe there. Misterxeight 23:47, 15 July 2008 (UTC)

These are the borders that were hashed out by Carlos and Jesse, the two people who were/are caretakers of the affected countries.

I have not been able to solidify NI as much as I'd like online, though I have quite a few ideas that have never been put down formally. I shall have to look up the wiki shortly.

As such, This looks to me as it's got to have a border that goes near Buenos Aires, that it must border Rio de la Plata on the east it has coastlands. That being said, I think I'm fine with it being a coastal country, but make it fit the stipulations above. BoArthur 17:00, 16 July 2008 (UTC)

Does anyone know where I can find a map to draw NE's border? However the proposed in the article looks pretty good to me. 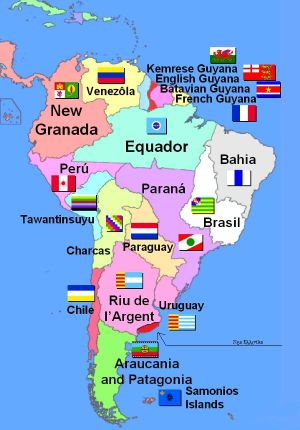 Did Jesse Bangs ever write down NE's? capital? There was something on the nuclear weapons page (on a sidenote, in just about every war in IB, someone drops the A-bomb, that's got to be bad for radiation levels and the ozone layer) about the Argentinians dropping a nuclear bomb on Cassandrapolis or something along that spelling.

The article says that Zalsan Agre is the name of the original main settlement and the seat of the Metropolitan, although there theoretically could be a different capital in modern times. It mentions that it's in the same place as Mar del Plata *here*, which is on the Atlantic coast south of the Buenos Aires metro area. Benkarnell 03:59, 2 August 2008 (UTC)

I can't see the image! I'm not sure, but you should probably upload images without Greek letter, apparently the system doesn't like it. —IJzeren Jan Uszkiełtu? 07:56, 2 August 2008 (UTC)

Since I'm too lazy to actually have my computer get me the Greek aplhabet for me, I've been using Wikipedia to get the alphabet. While getting Sigma to put on a page I noticed South American fascists used sigma and other Greek words for their party. Could we make a NE group like these guys, except changing the party? Misterxeight 19:12, 20 September 2008 (UTC)

Has the true location of Nea Illenicia been decided upon yet? Is it in the interior of *here*'s Argentina, coming close to Buenos Aires (what I'm assuming is Bons Oratges *there*)? Or is it along the southern coastline like in Misterxeight's map?Juan Martin Velez Linares 20:02, 8 September 2015 (CDT)

I'm friends with Mister Xeight on Facebook - I would suggest you bring this up *there* as I'm not sure how often he looks at Conculture or the wiki. BoArthur 09:53, 9 September 2015 (PDT)