Heraldry exists on the island in three tiers: the arms of the lordly family, arms granted by the lords, and a system of house marks used by the lord's tenants.

Heraldry of the Gardiner family

The coat of arms 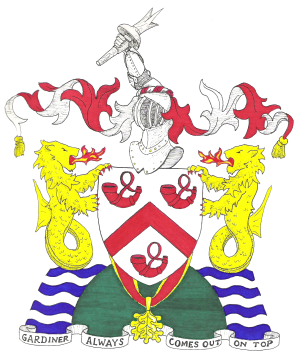 The full achievement of arms, minus the Allen quarters

It is certain that John Gardiner, third proprietor of the island, used the Gardiner shield and crest in their modern form. It is impossible to know whether his father or grandfather used the same arms, different arms, or none at all. Neither Lion nor his descendants were ever formally issued a grant of arms by the English heralds. Nevertheless, for rulers of an independent fief, a coat of arms was a supremely useful thing for marking property, sealing documents, and generally conveying a sense of lordly dignity.

The shield is blazoned Argent, a chevron between three buglehorns stringed, all gules. The crest is An arm in armor, the hand grasping the broken shaft of a lance, all argent. The shield bears some resemblance to some borne by other Englishmen named Gardiner, but there is no evidence that the American Gardiners inherited these bearings. Throughout the rest of the seventeenth and the entire eighteenth century, these arms were used on seals, tombstones, and decorations by the lordly family.

The English College of Arms made its first - and only attempt to regulate the arms of English subjects in North America in 1812 with the publication of Armorial of North America, Being a Register of Arms of All Lawful Bearers in His Majesty's North American Provinces. The work was extremely conservative, excluding nearly everyone with assumed arms, even if they had been assumed generations earlier. It so upset the provincial gentry that within a few years Virginia, Carolina, and the New England provinces had established their own heraldic authorities. Nevertheless, the Gardiner arms were included in the Armorial, which amounted to official recognition by the English heralds.

In 1820, while preparing for a visit to England, Lord Henry Lion Gardiner wrote the Master of Ceremonies' office about a matter of protocol. As lord of an independent territory subject to the king, should he not be considered more than a mere Lord of the Manor, an essentially meaningless title, and be treated with the same dignity as English peers, as the Lords Proprietor of Ter Mair were in Kemr? The question was deferred to the Earl Marshall, whose staff replied that, in his opinion, Henry should be regarded as essentially equal in rank to an English baron. Upon arriving in England, Henry went, letter in hand, to the College of Arms to ask permission to display supporters and a coronet of rank in his armorial achievement. The heralds said no to the coronet (he wasn't really a peer, after all) but agreed that supporters would be appropriate. Fortunately Henry had planned ahead and had arrived in England with his arms displayed on almost every item that could fit them, proudly including sea-lion supporters. These heraldic beasts had been used as a badge for several years by the family; their significance is explained below.

Henry's sense of propriety had led him to defer to the English heralds. Future Lords Gardiner would follow the example of their New England neighbors and make heraldic decisions based only on their own authority. A final version of the motto had yet to be adopted. Various French, Latin, and Mohegan mottoes had been used over the years. A young Lord William Lion Allen-Gardiner officially proclaimed a motto for the family and island in 1891 in plain English: "Gardiner always comes out on top." It came from a statement made by his grandfather Lord Henry II about the island's strict policy of neutrality during the Crisis of 1875. In the 18th and 19th centuries the family used the simpler but less evocative "By the name of Gardiner".

The final element of the achievement was a compartment beneath the sealion supporters. This modern addition is "For a compartment the sea barry wavy azure and argent, a mount vert set therein." The compartment represents the island in the sea and visually gives the arms a much more nautical look.

The Gardiners have never adopted a systematic way to difference their children's arms. Differencing was in fact rarely practiced before the mid-19th century. Since 1890 the lords have occasionally quartered the Gardiner arms with those of the Allen family, an armigerous Pennsylvaanian family of English extraction. The quartering only features in the family's personal arms; those of the islands remain the simple Gardiner horns and chevron.

Besides the crest itself, the Gardiner family used a single buglehorn as a badge throughout the eighteenth century. By the end of the century, the figure of a sea-lion rampant was also being used. It was said that Lion Gardiner was nicknamed "the Sea-Lion" during his lifetime, though there is scant evidence for that. Certainly locals were calling the Gardiners "the Sea-Lions" around the time the badge was adopted. Finally, a sprig of white-oak leaves, representing one of the most abundant local trees, was adopted in the early 20th century.

The Gardiners flew banners of their arms from their earliest days on the island. The banner of the island has been essentially unchanged at least since the founding of the NAL.

At sea, Gardiners Island ships fly the Old Blue Sheet for their ensigns, just as other NAL ships. However, since the island is not technically part of the NAL, its vessels often fly a small banner of arms just below the NAL ensign. For a civil jack (see NAL Provincial Jacks), the island's banner has been simplified to a single buglehorn on red, heraldically a kind of badge banner. A vessel belonging to the lord flies a red jack with three buglehorns.

Lord Henry II was a true romantic who did much to endow Gardiners Island with its famous medieval flair. He was the first to fly a heraldic standard in the fullest traditional form with a double-tailed shape. The standard has evolved somewhat since Henry's day. At the hoist is a gold cross on black - the Cross of St. Geowan, symbol of Wight. Lion Gardiner had at first named his island after Wight, before succeeding generations started simply using the family name. Furthermore, Henry is said to have wanted an English cross but was afraid that St. George's Cross might indicate Pan-Nationalist sympathies, one side in a League-wide debate that Lord Henry was determined to stay out of. The fly is divided lengthwise red and green, the Gardiner family livery colors as established by Henry II. The motto divides the fly into three segments, each of which houses a different badge in white, from the hoist: the crest, the sea-lion, and the oak leaves. Empty space is filled with small buglehorns. The fringe is red and white, the chief color and metal of the main arms. The standard flies on the manor house and at the topmasts of ships owned by the lord.

Henry II began the practice of granting arms to favored persons, reasoning that as the ruler of an independent entity, he no longer had to defer to the College of Arms. It was during his lordship that the Tenants' Court and the office of Reeve were formalized, and he issued his first grant of arms to one John Mac Gearailt, elected reeve in 1855. In 1866 he founded the Order of Manchonake, members of which are entitled to a grant of arms from the Lord Gardiner. Over the years a number of General Moderators, academics, and artists have been honored with Manchonake knighthoods, along with every island reeve and many members of certain long-term tenant families on the island, and local leaders and activists in Connecticut and Long Island.

The use of house marks among Gardiners Island tenants has been traced to an ethnic-Pennsylvaanish family in the 1780s whose mark is recorded in a volume of The Booke of Lord Gardiner His Tenants - a record of astonishing continuity down through the centuries of the island's history. The use of the runelike figures to mark personal property seems to have spread to a few other tenant families until the practice was formalized by Lord Henry II in the 1850s. It seems that Henry wished to extend the practice of heraldry to all the residents of his manor, but felt that citizens' arms went against the feudal spirit. House marks seemed a good compromise.

Gardiners Island house marks are required to maintain a linear form, like their German predecessors. They may be used alone or placed within a decorative shield shape, but they must not be colored as if they were true coats of arms. Common patterns include monograms, religious symbols, and shapes suggesting local plants and animals.

Related families often, but are not required to, use house marks that resemble one another. The few tenants that do have coats of arms also generally have a house mark alongside them. The Gardiners themselves have one that combines a horn-like shape with a distorted letter G. This mark has been incorporated into the lordly standard: rendered in brass, it traditionally tops the lord's flagstaffs.

Lord Henry II created the post of Manorial Herald and combined it with Record-keeper and Archivist, a decidedly part-time job that carries a small stipend and is usually given to a family member. The Manorial Herald is resposible for keeping records of all grants of arms and registered house marks of the island's tenants, knights of Manchonake, other persons granted arms by the herald, and of Allen-Gardiner family members on and off the island. The herald's badge combines a sea-lion with a broken lance. The heraldic tabard, only seldom worn, includes the Allen and Gardiner quarters.

Henry declined to merge his new herald's office with the New England Board of Heralds. However, since 1996 the office has been under the authority of the American College of Heralds. Before 1996, NAL citizens were free to petition the Lords Gardiner for grants of arms, which were given out sparingly or freely depending on the personality of the lord and herald. Since the creation of the ACH, requests for arms go through the national body.