The Vozgian Republic is one of the 29 constituent republics of the Russian Federation, located between the Republic of Petrograd-Novgorod, the Komi Republic and Muscovy on a territory roughly the same as Vologodskaya Oblast' *here*. It is inhabited primarily by Vozgians (ca. 40%), Russians (ca. 40%), and Komi (ca. 15%).

Like the Nassians and the Skuodians, the Vozgians speak a North-Slavic language, that during the centuries underwent heavy influence from neighbouring Uralic languages, especially Komi, and northern Russian dialects. Vozgian is written in Cyrillic script.

Vozgian history in a nutshell

Very little is known about the early history of the Vozgians. Scientists claim their ancestors were the ancient Slavic tribe of the Veztici, who settled in the area in the second or third century A.D. In any case, they have gone virtually unnoticed for many centuries. During the Middle Ages, most Vozgian territory fell just outside the realm of Kievan Rus'. Later, the western parts of what would later become the Vozgian Republic were gradually incorporated by the Novgorod Feudal Republic; just like the Uralic neighbours in the periphery of Novgorod's sphere of influence, the Vozgians had to pay tribute to their Novgorodian overlords. In the late 15th century, with the fall of Novgorod, it become part of Muscovy.

From that moment on, the fate of the Vozgians has been closely connected to that of Muscovy. Just like any other non-Russian nationality, they suffered from severe russification policies from the 19th century onwards. These policies became even more vigorous after the victory of the White Armies in the Russian Civil War and the foundation of the SNOR in 1923. The Vozgians remained hidden in the Vologda Gubernia, and only specialists knew this region was mostly inhabited by Vozgians and not by Russians.

During the 1950s, Russia became the scene of chaos and social unrest after years of mismanagement by SNOR leaders Iosif Vissarionov and Andrei Vlasov. In 1961, the White Council put Vlasov aside and appointed a more moderate ruler, Yevgeni Lipov, as the new "Supreme Leader of the Russian People". Lipov understood that national minorities had to be granted some limited form of regional autonomy, and in the mid-sixties, he abolished the old imperial administrative subdivisions, which completely neglected ethnicity or language, and introduced national territories instead. After a few border corrections, the province of Vologda now became the "Vozgian Province of Vologda".

Obviously, the existence of territorial entities for national and religious minorities didn't solve anything: besides a few concessions, the oppression of minorities continued, especially after Lipov's somewhat mysterious death in 1971, which brought an end to "the Thaw", as historians would later call the period under Lipov's rule. As later developments show, this ambiguous policy would only accelerate the dissolution of the country.

During the late 1980s, Russia found itself again in a deep crisis: the economy was in a disastrous state and the ideological bankrupt of the SNOR was complete. At this point, a new and more dynamic leader, Mikhail Gorbachenko, made an effort to reform the country thoroughly, granting the people a certain degree of democracy and freedom of speech. This immediately led to an enormous outburst of popular discontent, both in the form of anti-snorism and anti-Russian nationalism. The protest was partly adopted by local SNOR organisations, so that soon the party started to crumble from the inside. Also huge parts of the army started to desert or switch sides. Russia was on the verge of a civil war. Early 1991, a new Russian government, led by the moderate snorist Grigori Lyopukhin, hastily upgraded the national provinces to autonomous republics. The Vozgian Province of Vologda now became the Vozgian Autonomous Republic. Although nominally still ruled by the SNOR, its government consisted mostly of members of the Vozgian People's Front, a mix of progressive SNOR members and moderate nationalists from outside the party. Its primary aim was, initially, federalism, although later it would formulate total independence as one of its purposes. When in August of the same year a group of conservative SNOR members seized power in Moscow and most prominent members of the government were arrested, one republic after another proclaimed its independence in response. And so did the Vozgian Republic, on September 1.

Shortly thereafter, Russia officially became a federation of 29 republics, including eight Russian Republics. These republics are sovereign over their own territory, and their internal structure can differ from one republic to another. During the 1990s, the Federation was dominated by the two largest Russian republics, Muscovy and the Republic of Petrograd and Novgorod. The rivalry between them, both the result of traditional rivalry between their capitals and the very different political orientations of their leaders, prevented the Russian Federation from becoming monolythic again. From the late 1990s, however, the RPN has changed its orientation more to the West, which resulted in a candidate membership of the Baltic League in 2004. This made Muscovy, from the beginning a stronghold of post-snorism, its most powerful state. Most of the time, the Vozgian Republic has gone in between Muscovy and the RPN. During recent years, however, it has been closer to the RPN in its policies. Although the Vozgian Republic has not yet applied for membership of the Baltic League, it maintains close contacts with the RPN, Nassland, and (to a lesser degree) Skuodia. 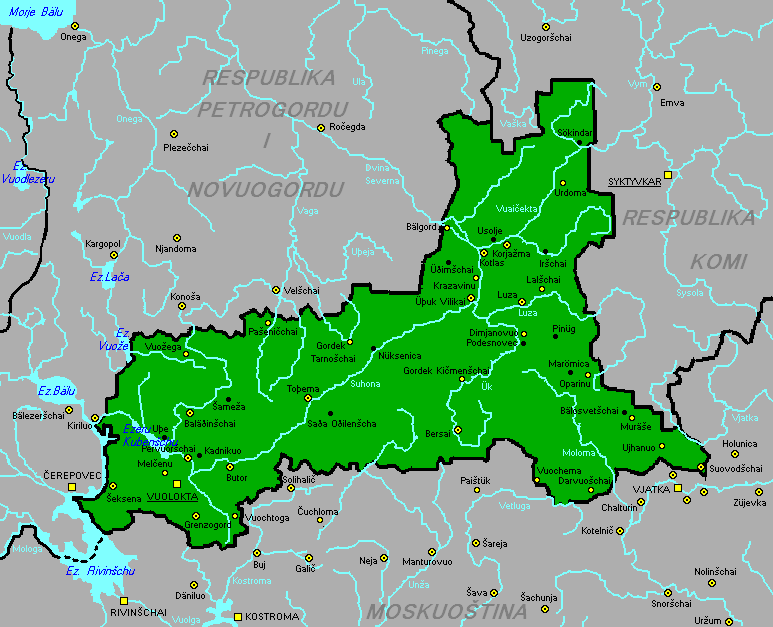 The Vozgian Republic is limited by:

Below follows a complete list of all cities and villages in the Vozgian Republic with more than 2000 inhabitants. For comparison, the second columns lists the (Russian) names, as use *here*.

ECONOMY OF THE SUB-NATIONAL ENTITY

CULTURE OF THE SUB-NATIONAL ENTITY