Would they be targeting the LoNE?

I presume the LoNE would be on their demonology list, probably right next to succubae and lycanthropes but far below Beelzebub (i.e. any of the current crowned heads) or The Great Satan (The White Council itself). My idea was that every generation looks for a Cause, one in which they can pour their hopes to remake the world into a better one. The virulance of such feelings depends on circumstances, and methinks the carnage of the Great Wars coupled with the changes wrought by the XXth century in general would "up the ante" so to speak. But there was no Vietnam War in IB. But it occurred to me that Snorist Russia could be viewed very much as Apartheid South Africa was *here* only much moreso. Zahir 07:37, 21 October 2005 (PDT)

Just one precision, while of course they can hate pretty much who they want (some anti-communist went after anything remotly leftist afterall), the LoNE never officialy supported SNOR and always had a rather ambivalent opinion of them.

Their problem is that while SNORists are (in theory) monarchists, they are also responsible for the dethroning of a few foreign kings (in georgia for example). Since LoNE is founded on a philosophy of order and continuity, the russians' actions were often considered almost as bad as some of the rabids republicans.

Something else, maybe you might think of another symbol, the eagle is used by many more countries so it might not be as effective.

I'm not disputing the logic of what you say, but keep in mind what I'm describing is a popular (and anything but centralized) movement, not a legal decision or philosophical point. To use a parallel from *here* what sense did it make blaming drafted soldiers for the Vietnam War? Yet that is what happened. Nor would the Anti-Snorists necessarily agree on tactics or blame--they would have their Left and Right Wings, their Moderates and Radicals, etc.

And I'm very open to more symbols and icons. Recall just how many there were for the Peaceniks and Hippies and that whole group! Zahir 16:53, 21 October 2005 (PDT)

Regarding the draftees, they were blamed for not dodging the draft if memory serves, a sort of guilt by association if you will (if no one went, there would be no war). My point about the LoNE was mainly that apart from the anti-monarchist, there would be little reason for any organised protest to go after it. Like picketing the red cross to protest against cut in the health care system: sure they both have similar interest but they are not linked in any way. If anything, the fact that they publicly rejected membership for russia would do the opposite (think of the commonwealth when the applied pressure on south africa).

Regarding symbols, apart from the peace sign, I'm drawing a blank honnestly.

I'm not suggesting that Anti-Snorists went after LoNE as a rule, but that to many in the Movement any support for monarchy was inherently suspicious. For others, it was identical to being a member of SNOR. Logical? Not really. But then, there are always a few loose screws in any large movement. Zahir 19:09, 21 October 2005 (PDT)

About the symbol, to me a good political emblem is something which is easy to grafiti on a wall with a only a can of spray paint and little artistic talents. Since you have designed it as a somewhat equivalent to the peace movement, I was thinking of something as simple as the peace sign:

the first 2 are a combination of "S" (for SNOR) and the forbidden sign. The third one is meant to be the simplest representation of the snorist eagle (the 2 heads) crossed out like the sign you see at the entrance of one way streets in some countries. Personnaly, I think the second is the best in term of simplicity. --Marc Pasquin 19:45, 21 October 2005 (PDT)

Okay now I couldn't resist and tried to make one of my own, based on #2 of yours:

would it be an S or a Cyrillic C? - AndrewSmith

It's likely that the symbol would become stylised, in which case it would end up looking something like this: 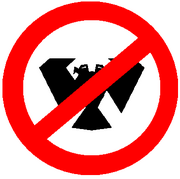 I agree, too. And I have to add that this looks more unswastika-like (is that a word?) than some of the other proposals. But that didn't stop me from having my own take at a symbol (on the right). I imagine it could actually have originated in Russia itself during the revolution in which the SNOR was finally overthrown (on stickers, buttons etc., and perhaps some dissidents even substituted real traffic signs during the night with this... --IJzeren Jan 23:48, 23 October 2005 (PDT)

Are you suggesting they formed a political group in Louisianne or the NAL or both? If Louisianne, add it to Political Parties of Louisianne under the Minor Parties section. BoArthur 09:50, 13 December 2005 (PST)