Logo of the Space Organisation

The Space Organisation (InterTurkic: Ğarç Uyumı; Russian: Kosmicheskaya Organizatsiya) is a consortium of technology companies, government bodies, amateur societies and financiers from Turkestan, parts of the Russian Federation, Persia and the Moghul National Realm, dedicated to the peaceful exploration of space.

Founded in 2005 in a flush of popular enthusiasm for spaceflight following the Louisiannan-Japanese launch of a man into earth orbit, the Ğarç Uyumı has nonetheless attracted an impressive array of members, including financial backing from several prominent Persian and Russian businessmen. The Turkestani military technology company Märgän Arms is involved in the consortium, and has been developing a launch vehicle based on its Aldaspan series of ground-launched ballistic rockets.

In mid-2006, the Moghul National Realm offered a former military base in the southern Talar-i-Band region for development as a launch site. Conversion of the Ormara Combined Naval/Air Force Base began towards the end of that year, and the facility has since been officially re-opened (late 2008) as the Talar-i-Band Ğarç Jayı ("Talar-i-Band Spaceport"). It is sometimes known outside of SpaceOrg as the "Ormara Launch Facility".

The Space Organisation was founded in 2005 by the merging of several amateur space societies from Central Asia, and two prominent financiers, one Persian and one Qazaqstani. Märgän Arms joined the consortium later that year, and gave the consortium a good deal more credibility on the technical front. Other financial backers and technology companies joined in the following three years, together with certain technology departments and government agencies from some of the countries involved.

SpaceOrg (ĞarU; KosmOrg) seem to be making more progress than the unfortunate Euro-Consortium, apparently still mired in disagreements over the colour scheme and name of their space vehicle. Their collective experience with spaceflight technology is limited, so the consortium are basically starting from scratch, but their inexperience only makes the progress they have achieved so far that much more impressive.

In addition, the consortium have designated a team headed by Märgän Arms for the development of carrier rockets. The team are currently working with the Aldaspan-6 and Aldaspan-7 rockets, though currently the Aldaspan-7 derived rockets seem to hold more promise.

Membership of ĞarU is open to all interested bodies, and though its membership has so far been limited geographically to the Central Asian region, there is nothing in its charter prohibiting the acceptance of a European, American or Oceanian member. The sole requirement for membership is to be able to contribute a certain minimum financial stake, which varies depending on whether the prospective member is a company, a governmental body, an individual financier or an amateur society.

Its logo represents the many different member organisations rising from the curve of the Earth to reach a common goal.

There are currently two different carrier rockets employed by Ğarç Uyumı, both based on members of the Aldaspan family of rockets developed by Turkestani company Märgän Arms. Aldaspan-series rockets are employed by the militaries of all four of SpaceOrg's current contributing nations, and each nation is therefore familiar with the capabilities and requirements of the rocket.

The Turkestan team, having the advantage of the Aldaspan series' developing company, completed their modifications to the Aldaspan-7 missile first, despite its more complex two-stage design, and gave the name Aruana to their rocket, after a flying dromedary camel of Qazaq legend.

On 16th April 2009, the Aruana rocket was used to successfully launch the Dostlik ("Friendship") satellite into low Earth orbit.

It is planned that the Mıtra carrier rocket will be used to launch SpaceOrg's second satellite Beybit ("Peace") some time in June.

A third, more advanced launch vehicle is also reported to be on the drawing board. Rumour suggests that unlike the Mıtra and Aruana rockets, the third rocket has been designed from the ground up as a launch vehicle. It is also reported that this carrier rocket will be much more powerful than either of the current launch vehicles, and able to loft a man-carrying capsule into orbit, possibly even a two-man capsule. The rumours also associate the name Şolpan ("Venus") with this project. 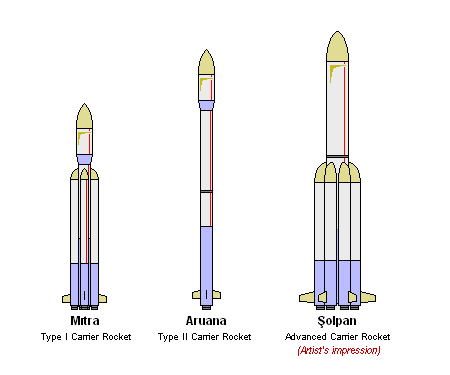