Märgän Arms is a major armaments manufacturer in Turkestan. ÜKÜ is the premier Turkestani producer of aeroplanes, while Märgän has typically concentrated on individual weapons systems, especially rockets, missiles and avionics, though its T-6 Yabalaq and T-7 Şıkra aeroplanes are still in service with the Turkestani armed forces.

Märgän ("Archer" in InterTurkic) was founded in 1969 primarily as a research company investigating radars and rocket/missile weapons systems. It quickly became the dominant Turkestani producer of rocket-based weaponry, including avionics, guidance systems and radar, and entered into a kind of unofficial partnership with ÜKÜ Armaments, in which ÜKÜ built the plane and Märgän provided the electronic guts and some of the weapons. Later on, in the 1980s, the company began to challenge ÜKÜ Armaments directly, building aeroplanes itself. Its first success was the T-6 Yabalaq ("Owl") night fighter, which was basically built around a powerful experimental Märgän radar system.

Today, the company is responsible for the T-10 Subürküt jet flying boat fighter, as well as an experimental rocket-propelled ground-launched point-defence interceptor for the Turkestani Guards, similar to the old Dalmatian Raketoplan.

The Oq (Arrow)-1 rocket was the first military rocket domestically produced by Turkestan. With limited endurance and range, no guidance systems at all and a tiny maximum warhead, it was inferior to most of the military rockets available from Russia and other Riga Pact countries, but was used by the Turkestan Military as its primary short-range air-launched rocket for some time between 1977 and 1985, mostly due to internal political reasons, though cost was also a factor. It was phased out in favour of a Russian-made rocket beginning in 1983.

The Oq-2 rocket was an adaptation of the Oq-1 designed to be launched from the ground from a man-portable tube. It was in most respects very similar to the Oq-1, except that its warhead was increased in size at the expense of some of its range. Like its aerial stablemate, it carried no guidance package and was a "point-and-shoot" line of sight weapon, but it did give the Turkestani infantry some limited anti-air and anti-tank capability for the first time.

Further developments of the Oq-2 rocket 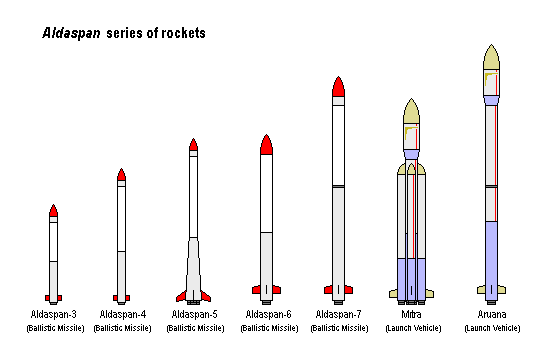 Series of medium- to long-range surface-to-surface ballistic missiles first introduced just prior to the outbreak of the Qaşgar War in 1991.

Nayza (Lance) is the name of the newest generation of air-launched rockets produced by Märgän Arms, which are still in systems testing and are due to enter service in 2012 (earlier if the bugs can be worked out). The Nayza missiles are larger than anything previously built by the company, and have a proportionally larger warhead and longer range than the latest generations of Oq, Aldaspan and Çoqpar rocket weapons. The Nayza missile comes in two variants:

Aq Nayza
Aq Nayza (White Lance) is designed to be carried by a larger aeroplane or smaller airship. When considered as a missile, it is actually the more sophisticated of the two variants, and features a brand-new radar homing system in which an onboard radar guides the rocket to its target.
Qara Nayza
The Qara Nayza (Black Lance) rocket is designed as part of a new weapons system for the Turkestani National Air Frigate currently in development. Unlike the Aq Nayza, the Qara Nayza has no active radar. It does, however, carry a radar receiver, and uses a signal from the National Air Frigate's powerful ATLAS targeting radar to home in on its target.

It should be noted that the system is still experimental and has not been deployed yet.

Due to its experience with military rocketry, Märgän is heavily involved in development of the launch vehicle for the civilian Central Asian space consortium. Şolpan (Venus) is rumoured to be a ground-up carrier rocket design capable of lofting a man into orbit. Its development has been shrouded in secrecy; but rumours have recently been surfacing from the Märgän research centre in the Qızıl Qum desert of a new rocket on the drawing-board, known as Şolpan.

The Yabalaq (Little Owl) night fighter was built around an experimental multi-frequency radar developed by Märgän specifically to be carried aloft by an aeroplane, rather than an airship. It is similar to *here*'s Heinkel He-219 night fighter, though its nose radar antenna is a lot more enclosed, giving it better streamlining and a slightly less buglike appearance. 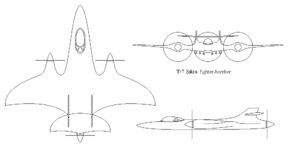 The Şıkra (Accipiter badius) fighter-bomber was Märgän's proposal for a longer-range ground-strike aeroplane. A more conventional plane than the rival T-7 proposal from ÜKÜ, it received the blessing of the military procurements bureau and entered service in 1988. Its unusual three-engine configuration - two "pullers" and one "pusher" - leave the centre-front open for the concentration of weaponry, and its large size enables it to carry quite a weapon load.

Following the successful development of the R-7 jet engine used in the T-9 Boran, proposals were submitted to the Turkestani Bureau of Weapons Procurement for a domestically-produced jet fighter of the flying-boat type to serve with the Guards units stationed at the Caspian and Aral seas and Lake Balxaş. Märgän's Subürküt (Sea Eagle) won the contract, but due to budgetary constraints the production run of this aircraft has been put on hold. 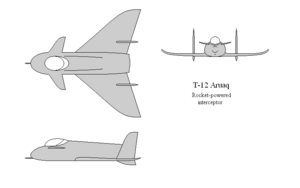 Based on Turkestan's experience in the Qaşgar War of 1991-1994, Märgän Arms began to re-investigate the concept of a rocket plane. Dalmatia had had moderate early success with their Raketoplan in the early 1960s, but the concept had then been shelved. But in the later stages of the Qaşgar War, Turkestani weapons designers began to take another look at the idea. The main strengths of a rocket aeroplane are its ability to climb quickly to altitude and its ability to keep working at altitudes where most air-breathing engines will shut down. These are the very things needed in an airship-killer, Märgän's techs reasoned, and began to develop their own man-carrying rocket interceptor as a ground-based point-defence vehicle for the Guards.