More than 2,000 years ago the Chinese gambled with painted cards which must have been the forerunners of today's playing cards. The earliest mention of playing cards in the West occurs in a Venetian manuscript of 1299, probably by Victor of Meirç.

The name of cards derives from the Italian carta - a four-sided piece of material (quarta).

Some have seen significance in that a normal pack has 52 cards - as many as there are weeks in a year - and as many suits as there are seasons. In fact, the four suits are said to symbolise different classes, a parallel that may reflect their Eastern origin, probably through India:

The playing cards commonly used most of in the Romance-speaking Mediterranean area and in Portugal are numbered from one (Ace: A) to ten (X); next come the "figures", or "military" cards - Soldier (Miles - M), Knight (Eques - E) and King (Rex - R). They are also used in the Lusoamerican Union, in contrast to different designs in Germanic-language countries and the Spanish-speaking Iberian regions. 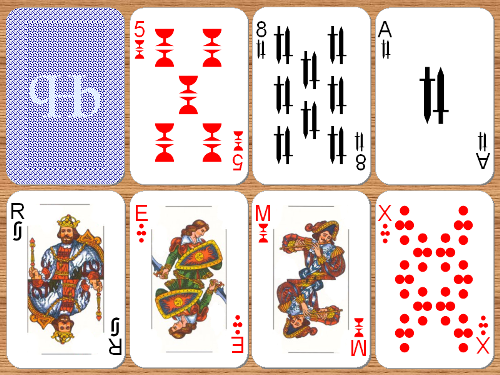 This is an example of a typical french pattern set of cards. Note that historicaly, french cards had been designed with the intent of of mass production and so, each suits cards type were made using only one etching which was then flipped to produce a second one. The distinction between the 4 cards were made by manualy printing the indice and using different colours for the character's clothes.

Although modern cards do allow for easily mass producing more diverse design, most decks of cards (except for a few novelty ones) are still made using a single pattern per suit type. 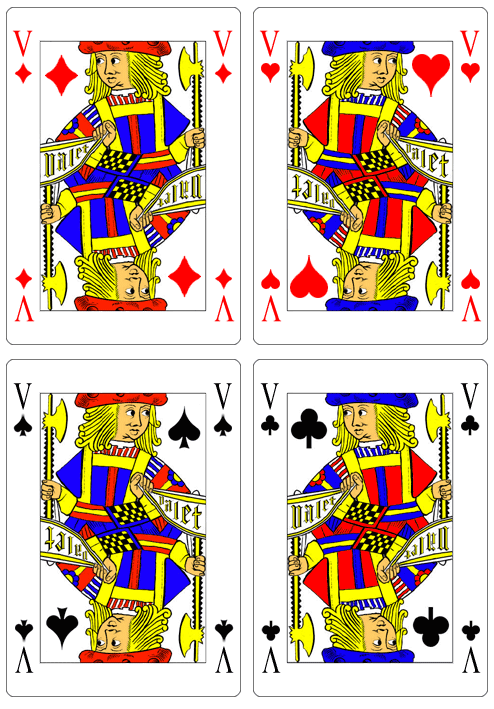 The deck of cards used in Central Asia is Persian in origin, tracing directly back to the ancient Eastern cards originating in India.

Like the Western decks, the Persian deck (Persian: Ganjifah, InterTurkic: Ğanjap) has four suits: Cups, Coins, Polo Sticks and Swords. In Turkic Central Asia, the polo sticks have been reinterpreted as riding whips, possibly from a badly-drawn example of a polo stick.

Unlike the various Western decks, the number cards of the Persian deck are typically numbered 1-9, not 2-10, plus the four face cards. The face cards show, in ascending order, a dancing-girl (Lakat: something of little value), a warrior (Sarbes), a king (Shāh), and the traditional Persian emblem of the lion and sun (As). Again, in Turkic Central Asia, this last has been redrawn, though for different reasons. The lion-and-sun emblem is so typically Persian that the image has slowly evolved away from its typical representation in Persia. Outside Persia, the lion has become smaller and smaller, eventually disappearing altogether in the Turkestani version, and the card has been renamed kün ("sun"). Uygur playing cards typically show a sun-and-moon pairing, but keep the name "sun".

Traditional Persian cards are round, though in modern Persia and Central Asia, people have found the rectangular Western-style cards easier to hold and manipulate. The traditional designs have been kept, however, and collectors'-item decks of old-style round cards can still occasionally be seen in play.

The names of the suits and cards (apart from the numbers 2 to 10) are as follows in several languages: