Where are these cards from? I've never seen a pack like em. I'm familiar with many varieties, but this is new! Are these your designs for Xliponian cards? If so, it would be a good idea to make that known! [PB]

These are intended to be thé standard playing cards - for most of Europe and America, anyway - in Ill Bethisad. There's nothing specifically Xliponian about them. It just so happened that design decisions *there* over the centuries turned out to be different from those *here*... Kyrmse 15:58, 31 Aug 2005 (PDT)

What would cause the shift from the standards *here* to the standards there? (Not against the idea, mind) What plausible attachments to other QSS items can we come up with? That is, if the majority is in favor of this? BoArthur

I like it. But like Dan, I too would like to know why it ended up that way in IB. The so-called "four classes" (priests, peasants, merchants, warriors) are reminiscent of the Hindu caste system. Perhaps the design of the cards originated in India *there*? Boreanesia 21:47, 31 Aug 2005 (PDT)

I think a strong point could be made in favour of this hypothesis, After all, parallels to chess probably are more than just a coincidence, so instead of having two (or four) armies fighting against each other, as in chess (or chaturanga), there would be four classes, each with their champions, vying for a temporary victory. Nothing more than an idea so far. Kyrmse 03:37, 1 Sep 2005 (PDT)

I'm torn because I like some of the proposed idea. I'm not sure it fits too well with known history, though. Western Europe has certainly had chess and cards for a while, but apart from both having "kings", I don't see any particular parallels. That is, no more parallels than any sort of wargame has with chess. Regarding where cards came from, they almost certainly "came from the East" ;))) I've usually seen references to Gypsies or other travellers/explorers bringing them to the West. And probably from multiple sources. Certainly, the Far East is the ultimate source -- cards seem to be a very early Chinese invention.

Re a single standard deck of cards: I réally don't much like that idea. Every region, even *here*, has its distinctive decks of cards; though there are only THREE basic types in Europe (the German, the French and the Italo-Iberian). Just because we only see "American" decks (which are derived from French models) in movies doesn't mean there aren't other kinds. IB is world where "single standard", and especially of a cultural artifact, is quite abnormal. And even where there is a single standard (such as the SI units), every language has its traditional names for the units. I could see the proposed design as one perhaps used in Latin America (and could certainly see some use up into the NAL), though hopefully not at the total expence of the traditional Spanish deck.

So we can all feast our eyes on the alternatives...

You can see an old German deck here. Doesn't even have a Queen; some of the suits are quite different.

Hungarian cards, influenced by German models, can be seen here.

My personal favourite, the Spanish deck, and the basis for your more stylised design, can be seen here.

The French, from which we get the cards we use in Britain and America, are here.

A Turkish deck, based also on the French model, is here.

And the "standard" from the USA, based on the French model too, is here.

It would seem to me that in a much lèss centralised place as IB is, where there is no one single country whose biggest export is culture, there would be even more varieties of cards. And, there would be no one dominant form. Perhaps distinctive styles could evolve in regions of larger countries (perhaps distinctions between Gaulhe and France; England and Scotland; the various countries of Italy). Colonisation and trade would ensure that more than just one type gets around; and would allow for later reinterpretations of traditional designs, such as the one Ron devised.

I agree that the "American standard" of *here* should nòt be the single standard of *there*. *There*, we might even have several kinds of distinctively American cards being played with along side the more familiar Dutch, British and French styles.

What a pity! I tried correcting the links, but even that didn't work. The links are all dead. The only way to see the pages, I think, is by using Google cache. Google for deck + site:gamesmuseum.uwaterloo.ca and you'll get there. But no pictures :( --IJzeren Jan 13:15, 1 Sep 2005 (PDT)

Quite so! They are wonderfully designed! It's funny -- I didn't have use the cache feature at all. Dunno what could be the problem! I'll see if I can copy-n-paste a couple of the pictures here temporarily, or else try to find an alternate source. Elemtilas

Anyway, I véry much like Ronald's cards, and I'd by all means like to keep them. But I also agree with Padraic: multiple standards are much more IB and much nicer anyway! ;) --IJzeren Jan 13:17, 1 Sep 2005 (PDT)

I like them too! Don't take me wrong, I don't want to ditch his designs; I just don't want to see ónly one design for all of IB. That would be very unusual indeed for the place! Elemtilas

I like them, but the symbols are far too nondistinctive compared to the standard symbols *here*, in particular the staves and daggers. Maybe you could switch the colors around, making the staves red? The reason hearts and spades can be kept apart is to no small degree the difference in color. BPJ

That would fly in the face of the traditional colour scheme (which are admittedly primarily found in the French family of cards!). If he were to use single symbols rather than the paired inverted symbols, that would help disambiguate the sword from the wand. And by the way, I think I get the curved wand now -- it's reminiscent of the shepherd's crook (also ties in with the bishop's curved staff). Very clever. [PB]

Frankly, I can't keep hearts and diamonds apart, that's one of the reasons I clearly prefer the Swiss German cards for Jass than the French ones. Though there are now 4-color French cards, with blue spades and green clover (clubs), which I find quite acceptable. Perhaps I'll have to make a Jervan design one day.  :)) The Jervan 03:30, 4 Sep 2005 (PDT) 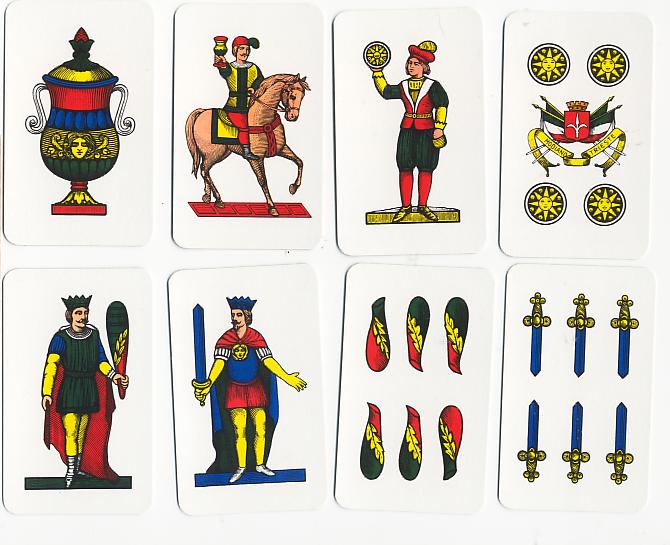 I looked for "Spanish" playing cards, and it seems the design is the same as the Italian. These cards also seem to be based upon tarot cards. -- Doobieous

All western cards are based on tarot or to put it another way, they are all modified/simplified version of it. the wide difference in term of symbols and names comes from either misunderstanding, mistranlations or adaptations.--203.164.53.47 20:09, 3 Sep 2005 (PDT)

Louisianan made ones would probably use a modernised version of these cards which were made during the french revolution. The ace, king, queen and jack are replaced respectively by the law, the genie, the liberty and the equality.--Marc Pasquin 19:20, 3 Sep 2005 (PDT)

The fact that all the "Génies" in the pack have wings makes me think that it was meant in the sense of a "supernatural alegorical representation". Obviously, the word in french can also mean genius but maybe a better translation cold be "spirit" ?--Marc Pasquin 16:39, 5 Sep 2005 (PDT)

That would make more sense. What are the suits in this deck? BoArthur

Same as in the modern french deck: trèfle, coeur, carreau & pique (the name under the figure only apply to that particular card, not the rest of the suit). I guess that unlike the figure`s name, the suits were not considered too "royalist".

They're different from the German ones, AFAIK. The suits are Roose (roses), Eichle (acorns), Schäle (bells) and Schilte (shields). The tens are represented by banners, and the Queen and Jack are replaced by the Ober (upper) and Under (lower).

Check out the rules of Jass here:

The game is easy to learn but offers some tactical complexity, is well-balanced and playable at all ages (especially after retirement or in the military ;). The Jervan 03:30, 4 Sep 2005 (PDT)

I said the pictured playing cards were manufactured in Hastr Beut, a town in the Hastr province of Xliponia. This is meant to be a Xliponian-language version of Altenburg, the Thuringian city where playing cards have been made for centuries - Altenburger Spielkarten. Altenburg is also the place where the (in Germany) very popular game of Skat was created. And, last not least, the centre of a region where the Kirmse family originated. Kirmse is the Saxon-dialect form of High German Kirmes, designating those village feasts where one of my ancestors probably distinguished himself by excessive eating, drinking and/or merrymaking... The y was a special touch by my great-grandfather.

Ron -- have you thought of actually printing out a pack of Hastr Beut cards? That would be very cool! [PB]

Considering IB is about diversity, I think it would be better if the french countries used what were the "french style" *here* (i.e. the standard suits).

One interesting trait was that french cards traditionaly carried a name on it (historical figure or such). Generic ones could simply carry the name of the card: 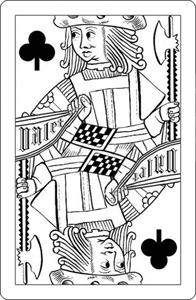 while deluxe one could be based on various theme (political, famous eras & countries, movies, etc..).

By the way, the image I included is a modernised version of a 16th century card. The 2 sided style make perfect sense once they are used more often for games then for reading the future. --Marc Pasquin 17:17, 19 Sep 2005 (PDT)

Sounds perfectly sensible. Should also be noted that this French deck is what is used in Britain and the USA *here*, and except for the index letter your example is very familiar to any American card player. Also, the French deck almost certainly was exported to Britain and America *there* as well.

I understand that the suits are pique, trefle, coeur, carreau; and the ranks are roi, dame, valet and numbers down to as.

The list I've seen for the names on the court cards is:

English names for suits and ranks would be unchanged from *here*; I suspect that Brithenig and possibly Kerno would have their own names. I would hazard rhui, rhiant, serw and as. Perhaps "serw" isn't the right word here? Also, if index letters are used, a way to disambiguate the rhui from the rhiant would have to be devised. [PB]

I'm changing the suit/rank table a bit, separating "French suits" from others. Please give me your feedback. What I'm trying for, of course, is "de-proposalisation" so we can all go on adding to the page! Kyrmse 06:45, 20 Sep 2005 (PDT)

I like what you've done. I note that the tops of the French suits are cut off, though. Wasn't able to fix. Re Brithenig names: carel <quadrelus; trefuil < trefeuil (please correct as needed!) [PB]

The Bohemian set of playing cards for a game called Ten mariáš (32 pieces), have either pictures symmetrical only by vertical axis (one-headed; ejnkopfik) or symmetrical by vertical and horizontal axis (double-headed; cvókopfik). Can be seen here.

There is also another, similar card game, called Ten tarok, which is also quite popular in Bohemia, which has unusual set of cards. 22 tarok cards, 4x4 figures (king, queen, rider and jack) and 4x4 values of four suits, which differ between black (7-10) and red (1-4). See them here Jan II.