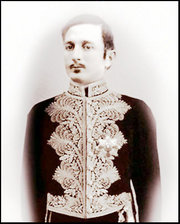 The successful revolt of Moldova against Russia at the end of the First Great War was one of several changes wrought by that conflict. But whereas neighboring Oltenia had a candidate for Prince ready made, with the support of the already independent Muntenia, Moldova as a state was less settled. As a result, the various negotiators among the Great Powers of Europe took upon themselves to "suggest" a monarch for the fledgling nation. Incentives were offered, and threats hinted at, so the provisional government agreed.

Initially, the throne was offered to Manuel II, but he turned it down. Some historians have speculated the provisional government would not have been so willing had they realized it was Pedro, not Manuel, they were going to receive as their new king.

Petru (as he now styled himself) married Aurelia (1901-1947), the daughter of a prominent boyar family in 1921, having converted from Catholocism to the Orthodox faith upon arrival in his new realm. She was one of many Boyar ladies paraded in front of the new King, and he chose Aurelia for her great beauty. She had already turned down several proposals of marriage already, but agreed to become Queen. Aurelia was an autocratic young woman, with a strong will which was tempered by her husband's tendency towards compromise and diplomacy. Together they were an effective team.

Apart from building Moldova's infrastructure, laws and army, Petru and Aurelia's policies during the 1920s and 1930s were to ally themselves with Prussia and the Holy Roman Empire as a counterpoint to the threat from Russia. When the two major powers formed an alliance, Moldova was swallowed up in the early stages of the Second Great War. From exile in Berlin, Petru and his queen unceasingly lobbied for Adolf Hessler's aid in reclaiming their kingdom. Eventually they received exactly that aid as part of the unravelling of the Allianz. But their return to their thrones was short-lived. By 1947 Moldova was again facing Russian conquest. Petru and Aurelia were reported killed in an air raid, although many believe to this day they were the victims of an assassination plot by Pro-SNOR-ists within the Army.