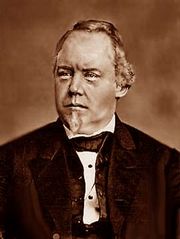 Born in Philadelphia, Pennsylvaania, he studied law, and was admitted to the bar in 1852. He moved to New Hampshire in 1853, where in 1860 he married Catherine Armaugh (1829-1893), with whom he would have two children, Henry (1861-1917) and Victoria (1864-1936). O'Domhnalla entered politics and was lieutenant governor of New Hampshire from 1862-1866. An early supporter of the Women’s Suffrage Movement, he failed to gain the Conservative Democrats’ nomination for the House of Delegates so he returned to his law practice and wrote his most famous book, Atlantis: The Antediluvian World (1879), in which he detailed theories about the so-called “Lost Continent” which he believed to be something like a utopia. The book became extremely popular and helped him gain the Whig Party’s support and win election to the Senate for Castreleon New in 1881.

Through the 1880s and 1890s O’Domhnalla rose in the Party, eventually becoming—along with Delegate William McKinley—a leader of the Pro-Suffrage, liberal wing. His and McKinley’s election as Whips of their respective houses of Parliament heralded the victory of that wing. The sudden death of John Sparrow David Thompson put Bjorn Honstadt in the General Moderator’s office, but his health was frail. Parliament authorized a special election and a Whig victory was all-but-assured. Either McKinley or O’Domhnalla was certain to become GM, but the sudden death of the latter’s wife affected him deeply. He resigned from Parliament, leaving McKinley an uncontested field.

For the rest of his life, O’Domhnalla devoted himself to writing history, perhaps hoping to regain the huge success of his Atlantis work. He wrote a book questioning the authorship of Gwilim Trammelpila’s plays as well as a defense of the Duke of Buckingham, claiming Richard III of England had killed the “Princes in the Tower.” He also wrote a work theorizing that The Schumann Brothers were in fact one person. None of these books were as successful as his first, and O’Domhnalla left his family in substantial debt upon his death in 1902.

His son Henry was killed in France during the First Great War. His daughter Victoria married, moved to Illinoise and elected to Parliament on the Whig ticket in 1929. She served for two years as Minister of Administrative Affairs during the tenure of Gwilliam Lyon MacDowell.