The Headless Starlet refers to a famous unsolved murder from 1959, which has come to be iconic for the Breuckelen world of show business glamour coupled with gritty reality. The case has been the source of widespread speculation as well as several books and film adaptations. 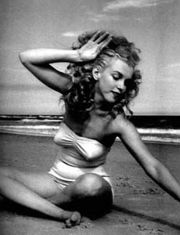 The victim was identified as Nora Jane Mortensen (born 1926), an orphan who ran away from her adopted parents in New Sweden following the Second Great War. Straightening and bleaching her hair, she changed her name to Elizabeth Long (after briefly using a different alias, Marie Lynn Monroe) but she never achieved success beyond an unsteady stream of work as a lingerie model. Long had told her roommate that she was going to work on movie set after she met with her former husband. She had worked as an extra and bit-part actress in movies for several different studios. Police checked, but none of the studios had any work in progress or were even open that evening. The last person to see her was a clerk in a store near her home, who said she appeared to be waiting for someone.

Her body was found one week later, in an abandoned lot amid overgrown weeds. She had been beheaded and the body exsanguinated. The head was never found, a fact which has fueled conspiracy theories about her identity. The Breuckelen Police, however, determined the name of the victim from her fingerprints, which had been collected when Long (or Mortensen) was picked up on suspicion of soliciting in 1957. The charges were dropped.

Speculation about the "Headless Starlet" was rampant, and continued to be the focus of press reports for many months following the crime's discovery. At this time, numerous rumors came to be accepted as fact and the police tended to use these to help weed out false confessions. Among these were:

One reason for the extraordinary attention this murder received may have been the photographic record of her, which inspired the attention of numerous artists. Her trademark platinum blonde hair, beauty mark and buxom figure even became something of a cliche in American films, copied by later starlets. Every single photograph taken of Long became a valuable commodity, with fakes of same becoming a minor industry. Likewise, fictional versions of her life--including linking her (with no evidence) to members of the O'Kinneide family, who in some theories are supposed to have contracted her death from La Pegre--have flourished.

Technically, the case remains open, although the odds of the murderer still being alive are remote. The Central Bureau for Investigation regards her case as almost certainly the result of a serial killer. Unofficial speculation continues to run rampant, with multiple theories and accusations appearing in print form almost yearly.