The Vompire is a very widespread piece of folklore that has become the basis for a popular genre of fiction since the beginning of the XIXth century.

In essence, the vompire is a corpse or ghost that sustains itself by drinking the blood of the living. That is pretty much universal, although variations certainly exist. In terms of actual legend, beheading is the only certain way to kill one of these creatures--at least that is the most univeral cure. Popular fiction has added a wooden stake through the heart (a common folkloric cure), burning (ditto) and direct exposure to holy objects and/or sunlight. These last have no basis in folklore but are now part of the univeral "image" of the vompire.

Tales of the dead rising to consume the life of those around them seem to predate writing itself. Among ancient peoples, the vompire is nearly always female, a kind of perverse mother figure who instead of giving life takes it.

Accounts of vompirism since the Rennaissance usually involve symptoms of what we would call tuberculosis or what was then referred to as "consumption." Increasing pallor, weakness, difficulty breathing and the sensation of some one sitting on the chest were explained as the recent dead haunting and feeding upon the living. The usual remedy--digging up the most recent corpses to burn them--did indeed help stop the spread, but this is likely because the corpses were sources of contagion. Also, the processes of decomposition were usually taken as "proof" of vompirism.

Different nations and cultures described the vompire differently. Here is a sample of how they were described at different times and by different peoples:

It was also said vompires could not bear to see mustard seeds (or rice) without counting them. They were said to be unable to cross running water. Some legends claimed they cast no reflection and no shadows. Others proclaim vompires allergic to garlic or wild roses or briars or wolfsbane.

The vampire legends of Xliponia have proven the most compelling to a modern audience, so much so that country is now associated with the vompire in many peoples' minds (which has not hurt their tourism industry one bit, nor discouraged filmmakers from going there). Xliponian vompires are less walking corpses than incubi/succubi, ghosts that sexually prey upon their victims and drink their blood, which allows them to have physical form. Vompires from this land are traditionally associated with wolves or serpents, and folklore abounds with tales of brides or grooms learning their new mate was not human.

The first popular novel to feature a vompire was simply titled "The Vompire" and was written by a Dr. Ion Polidor in 1820. Its plot became the basis for dozens of stage plays and even a few operas. A young man named Aubrey meets a wonderfully charming nobleman named Lord Traho while travelling in Xliponia. When bandits attack them, Lord Traho is mortally wounded but begs Aubrey to leave his body out for the full moon. A year later, Aubrey returns to England to learn his sister is now engaged to the previously-deceased Lord Traho! Some research soon reveals the legends of the "walking dead" but Aubrey is too late to save his sister from becoming the vompire's meal.

The second "classic" vompire story was written by Sheridan LeFanu (1811-1879), an english writer who moved to Kemr in 1840. His novella "Harmila" (1851) was widely admired and circulated. It has also come to be the second-most filmed vompire story after "Lord Vorlock". The narrator, Caroleth, lives with her Kemrese father in a remote area of Xliponia, near the ruins of a castle of a now-extinct noble family, the Vil-Pasiliqs (Caroleth's mother was distantly related to them). A carriage breaks down near their home one night and the aristocratic woman inside begs Caroleth's father to allow her daughter Harmila to stay with them until she returns. Thinking he has found a companion for his lonely daughter, he agrees. From that time on, Caroleth begins to weaken and have dreams, terrifying yet oddly enticing. Harmila is in fact the last Countess Vil-Pasiliq, who died 200 years before, a fact that is revealed when the father of another of her victims shows up. In the end he finds her hidden grave and decaptitates her. This novella is remembered for, among other things, being one of the first lesbian love stories in popular literature.

The most famous vompire novel of all is Lord Vorlock by Brom Stoker. Although never positively identified, Lord Vorlock of the title is hinted at being from Xliponia time and again. 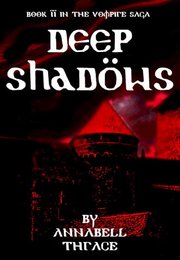 cover of the novel Deep Shadows by Annabell Thrace

Novelist Annabell Thrace has written as series of best-selling books about vompires, mostly centered around her home town of Boston. Her main hero, Luis, is a minor Xliponian nobleman "turned" in the late XVIIIth century whose adventures eventually reveal the mystic origins of the vompire race. So far her "Saga of the Vompires" comprises five novels:

Interestingly, Chicago Comics even has a vompire Superhero as a member of their group, The Infernal Five.

Apart from the various films, there has also been a popular t.v. series based on vompiric lore. Traci the Vompire Hunter lasted seven seasons and has so far spawned two spinoffs: Lance about a vompire who longs to be human again, and Guardians about a group of supernatural hunters. There was also the English series Infrared and the largely forgotten Vorlock: The Series.

The first vompire film was made following the First Great War in the Holy Roman Empire, an unauthorized adaptation of "Lord Vorlock" titled "Nosferatu." A classic version was made starring Conrad Veidt in the 1930s, spawning several sequels including "Lady Vorlock", a motion picture made in Louisianne yet believed lost until a print turned up in 1989. It has become something of a cult classic. Terence Stamp made eleven films about Vorlock during the 1960s and 1970s, from the first color version "Horror of Vorlock" (1966) to the campy "Vorlock A Go-Go" (1978) after which he swore off the role. That hasn't prevented new versions being made, including a big-budget version with Gary Oldman in the title role.

"Harmila" film adaptations have also been many. It was the basis for several rather arty horror films made in Louisianne and New Francy between 1935 and 1960, but the most popular adaptations were made in the 1970s as part of a trilogy that emphasized the lesbian storyline and rarely missed an opportunity to have the lovely starlets in the cast remove their clothes. Those films were:

More recently, an attempt to seriously adapt LeFanu's story was filmed by a small production company in New Orleans. "Roses Are Red" (its English language title) set the story in modern day Louisianne. Caroleth is portrayed as an innocent orphan, the object of lust by her tormented guardian, a priest. Harmila is an older woman in this version, played by Atlanta Wells and the blend of eroticism with horror was much commented upon. Indeed, the film went on to become very popular when it finally found a distributor in 1994, five years after it was made. The Alliance for Public Decency proclaimed it "The most perverse and perverted example of film-making ever produced." This proclamation may have helped ticket sales, but it also prevented the film from being shown in dozens of venues due to cinema owners flatly refusing to show it.

There have been repeated attempts to film "Conversations With A Vompire" in the past, often tailoring the script to different actors. So far, none have gone beyond the screenwriting stage.

"Subterranea" (1999) was an unexpected smash hit when it was released. Filmed on location in Xliponia, the film deals with at attempt to destroy the oldest vompire in the world and start a war to take over humanity. It starred the up and coming English actress Beth Kettensale, who has since married the director. The sequel, "Subterranean: The Bloodstone" (2003), made for over five times the budget of the original, did even better at the box office. However, plans for third film look precarious as Ms. Kettensale has filed for divorce.

A new television series called Eternal Night has been announced for the 2008 season in the NAL.

A vompire novel titled Allow Me In was published in 2008 to considerable acclaim.