Breuckelen is a borough of New Amsterdam in Castreleon New, just across the East River from Manhattan. Although it technically remains a part of New Amsterdam, in some respects it treats itself (and is treated by others) as more of a satellite city than a borough of New Amsterdam. For that reason, journalists and commentators sometimes prefer to use the term "city-borough." Breuckelen is perhaps most famous as the home of the early motion picture industry in the NAL, and remains the home of many movie stars as well as the location of major film and television studios. Indeed, "Breuckelen" in some quarters has come to mean the epitome of fake, in an entertainment-specific way (usually in the view of those politically right-of-center), often accompanied by the term "New Amsterdam values". Politically, Breuckelen has usually been dominated by the Whig and Socialist Parties, with a solid minority in the Progressive Conservatives.

Breuckelen is divided into six boroughs that were originally dutch villages when the area was originally settled. These villages were gradually incorporated into Breuckelen as boroughs. They are:

Each of Breuckelen's boroughs is headed by a Borough Manager, elected by the given borough. The Managers are in turn members of the City Council, who have seven "at large" Councilman chosen in a city-wide general election. The City Council in turn elects a Moderator (this official's title has changed many times over the years, from Burough President to Chief Alderman to First Manager, etc.). Each of the Boroughs is further subdivided into neighborhoods or Waards which have their own set of councilmen to handle local affairs (approving of playground renovations, and the like.) 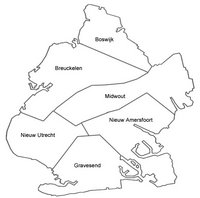 Map of the Boroughs of Breuckelen.

The Waards are divided as follows:

Although it is also claimed by the citizens of Manhattan, it is difficult to deny that the Breuckelen Bridge bears the name of one borough and not the other. (It should be noted, however, that another major bridge is named "The Manhattan Bridge", although it is less famous.) Widely renowned as a masterpiece of engineering, the Bridge remains one of the quintessential landmarks not only of the city, but of the NAL itself.

In the heart of East Breuckelen, where major motion picture studios have a long and sometimes-glorious, sometimes-shady history, is the Walk of Fame. Here, stars of film, radio and television are immortalized with stars bearing their names along and around the famous Sunrise Boulevard. This is also the site of the (in)famous Headless Starlet Murder Case.

The JFK Aerodrome (named for a hero of the Second Great War) is one of the largest in the world, with flights leaving every day for nearly every destination on earth.

Amusement parks and the like that dot places like Brighton Beach and Coney Island are famous, and can be counted on being crowded for much of the year.

But the city-burough is perhaps most famous (after the movie industry) for its Cricket Team, one the most well-known world-wide--the Breuckelen Trollies which are a source of great pride and even greater debate. The Breuckelen Cricket Club has grown to be one of the most prestigious groups in the city-burough and it is a matter of common wisdom that membership in the Club is pretty much a prerequisate for any local political career. Interestingly, the Trollies traditional rivals have been the Philadelphia Club's Covies (it remains something of an American tendency to give their Cricket Teams actual names apart from the Club with which they are associated).

Retrieved from "http://ib.frath.net/w/Breuckelen"
Category: Cities of the NAL