Gloria Dawson (1942-1973) was an actress whose life and career have continued to be a source of fascination decades after her death. Born in Ontario to working class parents, her father was killed in the Second Great War. She had a demanding mother who in many biographers' opinion was probably suffering from bipolar disorder. It is possible Gloria had the same condition.

Leaving home for New Amsterdam in 1959, she got work as a (sometimes nude) model and various parts in plays as well as some films. In 1964 she got her big break when cast in the lead of Fatal Femme from Premier Studios. A series of seven films followed in the next five years, mostly comedies but including two thrillers. In one, The Circle, she played a victim who stalked her rapist and murdered him. Many critics thought this her best performance. 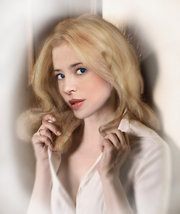 But in 1969 she was cast in what nearly everyone assumed would be a single-season television series, Vixen. Based on a superhero comic of the same name, Gloria played a reformed cat burglar seeking to avenge the murder of a detective to whom she had been engaged. The costume, which included a cowl with whiskers, was very revealing and was condemned by the Alliance for Public Decency (ADP). This may have helped Vixen's ratings, because it lasted four years. Gloria made no secret of the fact she hated the show, hated the costume, hated what she believed it was doing to her career. During the show's hiatus, she worked on projects and began attending classes at the American Shakespear Conservatory in New Amsterdam.

In 1972, she met and began to be seen on the arm of the Kemrese royal Prince Medrad, younger brother of Gereint XIII. Gossip columnists were abuzz with rumors of an engagement. Gloria's friends all confirmed later that she and Medrad were definitely in love. But the prince was one of the casualties in the loss the R.M.A.S. Gwenedd's Pride in January, 1973. That year Vixen was cancelled.

On December 7, 1973 her housekeeper came to the bungalow in Savannah, Jacobia, where Gloria had been staying. She found the actress in bed, nude, lifeless. An autopsy determined she had died of an overdose of tranquilizers (which she was known to take). The official verdice was "Death by misadventure" or accident. However, theories of suicide or murder continue to be put forth in the more than one hundred books published on her life and death since then. It is true that she had recently been turned down for the lead in The Life of Jayne Barlowe for which she'd been lobbying very hard. This is usually taken as evidence of suicide. Murder proponents assume that she and Prince Medrad were victims of a plot, usually having to do Scandanavian Intelligence Services and/or organized crime, although some claim that the Prince's brother had them killed after Gloria became pregnant.

Her life story has been filmed no less than nine times, often thinly disguised and taking wild liberties with the actual facts of her life. Her grave in Manhattan continues to be visited by well-wishers and fans, many of whom weren't even born when she died. She left her estate (including residuals for Vixen) to the American Shakespear Company in New Amsterdam. And for thirty years nearly every promising blonde ingenue in the motion picture industry has at one time or another been referred to as "The New Gloria Dawson."