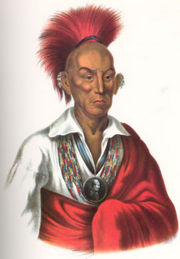 A legendary war chief and his province's first Lord Governor, Black Hawk is revered as the founding father of the NAL Province of Ouisconsin.

Born in 1767, Black Hawk became a renowned warrior from his youth and by 1800 or so was one of the primary war chiefs of his nation, the Sauk-Fox confederacy. He achieved notoriety during the Neogallican Civil War and subsequent skirmishings, when he led forces to prevent French settlers from taking Native land.

It was in the 1828 War that he became a symbol of unity among both the Natives and Newcomers of the land that became Ouisconsin. His charisma and tactical prowess were a major factor in the failure of Louisianne's invasion of Ouisconsin. After halting the Louisiannais advance, he united his forces with the NAL army and helped lead the invasion and conquest of Les Plaines.

In his home province, Black Hawk is widely credited with creating the Ouisconsin identity, fusing the "eight nations" of tribes and colonists into one united province. Of course, he is credited with most good things in the province, including the first schoolhouse and first first building in Chicago. Ouisconsians venerate his memory deeply; indeed, during the drive from Alton to Baie des Puants [Green Bay], it is possible to visit his birthplace six times.

A local hero, Black Hawk ran unopposed for Lord Governor when Ouisconsin became a province in 1835. He was 68 years old. By the end of his term, his health was failing and he did not seek reelection. As a sign of the unity of Ouisconsin, Black Hawk chose to be buried in the provincial capital of St. Francis rather than his tribe's traditional burial grounds in Saukenuk, old capital of Sauk-Fox.

The Solemn League Navy has an airship carrier named Black Hawk in his honor, while Continental Coast Guard personnel are often dubbed "Black Hawks" due to their insignia, designed in his honor.