The name Algeria is derived from the name of the city of Algiers, from the Arabic word al-jazā’ir, which translates as the islands, referring to the four islands which lay off that city's coast until becoming part of the mainland in 1525. Known as Al-Jazarya to the native population, it is called Algerie by the French. This region of France was colonized by Napoleon shortly after the French Revolution. It is a region of the Gaul Community.

As part of Metropolitain France, Algeria is governed by a Regional Prefect and is divided into a handful of prefectures. Because this region only consists of the coast and the fertile Tell region, it is one of the smaller African nations, but still one of the more populous along the south Mediterranean coasts. 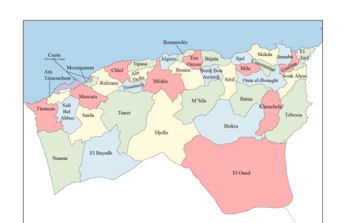 Until 1933, the wilaya of Algiers were esteemed as sub-prefectures in the Algeria département, producing a gross misrepresentation on the national stage for Algerians. Following riots in major French cities such as Marseille, Lyon and Paris as well as across Algeria, the government allowed for better representation of the near one-third of France's total population. The wilaya are now treated as equivalent with the métropolitain départements.

The Capital is located in the city of Algiers. Most prefectures or wilaya are named after their capital city, however some have retained their historical name, their former capital inside another wilaya. Current numbering is as follows.

Though the native inhabitants of this land are the Berber tribes, for most of the 3.000 year history of Al-Jazarya the rulers have been foreign. In 1.000 BC the Phoenecians and the Roman Republic in 200 BC are among the most noteworthy prior to the Arab invasion during the 8th Century.

This flow of conquests was not a one-way affair, as in medieval times the Fatimid Berber dynasty which began in Al-Jazarya took over Egypt, though it quickly abandoned North Africa. After the Arab invasion, the Brothers ‘Barbarossa’, Aruj and Khair ad Din made the coast into a base for pirate corsairs, peaking in activity in the 17th century, when the pirate activities were shifted eastward to Tunisia.

Feigning offense to their consulate, the French invaded in 1830. Intense resistance by the Emir Abdelkader and his followers made the assimilation difficult and incomplete until the early 20th century, when the last of the Tuareg were conquered.

In this time, the French had integrated Algeria as a part of metropolitain France, and more than a million French and Gaules moving across the Mediterannean to become ‘pied-noir’. These farmers of the Al-Jazaryan coastal plains occupied most of Al-Jazarya’s prized cities. People of French and Gaul descent were treated as any other French citizen, including representation in Parliament, whereas the native Berbers and Arabs were slower to be integrated to suffrage. This was rectified in 1870 when an agreement was reached, allowing the Arab and Berber population to be ruled by sharia law in private matters, but all legal matters were given to the French government.

In 1954, the National Liberation Front(FLN) launched the guerrilla Al-Jazaryan war of independence. With a full grant of suffrage and an increase of Al-Jazaryan autonomy Al-Jazarya remained a department of France although much territory in the Sahara was lost to the Maghreb Caliphate.

The methods of the freedom fighters were not well liked by the natives, as they terrorized civilians of both sides, held riots and brutally massacred villages.

A bloody civil war raged in the 1990’s, due largely to machinations of the Maghreb Caliphate. More than 100,000 people were killed, often in unprovoked massacres of civilians, by guerrilla groups such as the Armed Islamic Group and the Etoile Nord-Africain.

Most of the coastal area is hilly, sometimes even mountainous, and there are few good harbours. The area just south of the coast, known as the Tell, is fertile. Further south is the Atlas mountain range and the Sahara desert. Al-Jazar and Constantine are the main cities. Al-Jazarya's climate is arid and hot, although the coastal climate is mild, and the winters in the mountainous areas can be severe. Al-Jazarya is prone to sirocco, a hot dust- and sand-laden wind especially common in summer.

Algeria is bordered by:

North: The Mediterranean Sea
West and South: Maghreb
East: Tunisia, part of the Kingdom of the Two Sicilies

Algeria is largely pastoral, with a growing industrial and tourist base in the coastal regions. Mostly the economy is geared toward servicing needs of the rest of Metropolitan France.

Algeria is known the world over for its fine wines, surpassing the notoriety of even some French wines. Most notable are the wines from Le Vignoble de la Mitidja, which was established in the early days of French Colonization. They suffered during the uprisings for independence, but have since returned to their former glories.

Rai, a locally developed pop music form, has great popularity in Al-Jazarya, and enjoys some popularity abroad as well, notably in France, where a large number of Al-Jazaryans live. More traditional forms include Chaabi music, folk music, and Andalusi music, the "classical" music of Al-Jazarya, descended from the courtly tradition of Moorish Al-Andalus.