The Sisters of Justice is a team of all-female superheroes in the fictional universe of Millennium Comics. The first version never generated a great deal of interest, but a new incarnation has become a steady seller after an miniseries introducing the new version of the team. 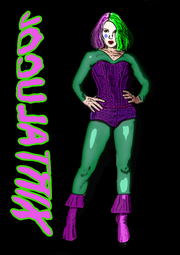 Originally, the Sisters were comprised of Kit Vixen, the teenage sidekick of Vixen, The Hummingbird and Suzanne Dale, the friend of the android superhero Mentor who had given her numerous small inventions (as had her uncle, whose murder inspired her to fight supervillains in the first place). Suzanne Dale never quite settled on a nom-de-guerre, although the press dubbed her Gadget Girl.

Later, the group was sometimes helped/joined by Joculatrix, a teenaged runaway who had also befriended Mentor. Her natural cunning and thorough knowledge of the shadowy corners of Millennium City (the abandoned subway stations, old sewer system, the natural caves, etc.) proved very valuable.

The team generally found itself fighting "second tier" villains in the Millennium universe. In fact, they even inspired a short-lived supervillains team called the Brothers in Crime (The Questioneer, Dr. Wax and Count Nocturno). Once, they went up against the Coalition of Evil and won, albeit barely. Some villains they fought were actually unique to them:

By 1990 the team rarely met and there was little interest in it. When Kit Vixen decided to go it alone as She Lynx for all practical purposes the team disbanded. 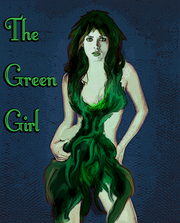 In 2002, a miniseries re-introduced the Sisters of Justice with a new premise and new characters. The start involved the murder of Suzanne Dale and Joculatrix's desire to hunt down the killer, which led to her recruitment of allies. One of these was The Green Girl, the semi-foster daughter of Doc Gabriel.

Central to that story was Dark Novice, who began as a teenaged girl obsessed with superheroes who accidently witnessed something to do with Suzanne Dale's murder. She was kidnapped by Novice, a white-clad martial arts henchwoman of the new Doctor Wax. Used as a test subject for what was supposed to be a weapon that disintegrated matter, instead she (very painfully) gained a weird power of her own--a kind of control over darkness. She could darken an area, or move a shadow, or even enter one shadow and emerge from another (but they had to be line-of-sight). But she also gained an extreme sensitivity to light, as well as a burning hatred for the torture she'd endured. She escaped and was able to help the new Sisters track down Novice.

The new Sisters were in some ways more like a street gang or perhaps a version of Robin Hood's merrie men than a superhero team. Rather that deal with threats to the world, for example, they focussed on thwarting the activities of Millennium City's most unreachable crimelords, the ones who tend to have bizarre and/or superhuman minions. Most of their adventures so far take place against a backdrop of the struggle between two crime lords in particular:

The new Sisters of Justice can be described as a barely-functional trinity. Joculatrix is the senior-most of them, in many ways the most world-wise. Dark Novice is the most angry and unstable, who feels great affinity for the other two as the only ones who can dimly understand her POV. Green Girl, on the other hand, is the most patient and perhaps the sanest of them.

All three tend to be more intuitive than methodical, which has proven one of their greatest advantages--almost no one manages to predict what they'll do next. In fact, some regard them as little better than the criminals they seek to apprehend. More than one police officer and politician have tried to apprehend the Sisters, but they have proven very loyal to each other and hence difficult to capture permanently.