Jacques Cartier de Mars was a series of nine novels written by H. P. Louvain during the 1920s and 1930s. It was a fantasy series full of bizarre details and swash-buckling on an alien world, and has continued to have a loyal following to this day.

Honoré Philippe Louvain (b. 1895 d. 1941) was an only child in troubled marriage and grew into a troubled adult who escaped from a sad, mundane existence to thrilling adventures with his pen. His mother had been eager to become a nun (or so she said) when seduced by Honoré’s father, who later deserted his family. This at least was a lie, or perhaps a delusion, since New Orleans police records show Philippe Louvain was murdered in 1902. His wife discovered the body. Gisèlle Louvain devoted her entire life to her son, whom she rarely let out of her sight and insisted was physically very frail. Other than lack of exercise there is no real evidence of this.

Young Louvain did attend school, where he excelled. Among other things, he had a gift for languages and a true love of both history and mythology. From school, he enrolled in a program that allowed him to make pen pals from all over America. Thus from age ten onward, he regularly wrote letters to a gradually expanding circle of long-distance friends. Several shared his ambition to write and his love of the macabre. They encouraged him to organize his notes and submit them for publication.

In 1912, the first of these stories was published by “Fantastique” magazine in serial form, and almost immediately became very popular with their specialized audience. By age 18, Honoré was a genuine breadwinner, but watched his mother descend into madness. Increasingly paranoid, she finally had to be committed in 1922, an act for which Honore probably never forgave himself.

Louvain remained a peculiar person up until his death. An ardent believer in Neocapitalism, he found Islam the most attractive of religions. He also thought his native Louisianne destined to one day dominate the entire continent as the crossroads of all transportation. Yet he spoke admiringly of New Francy, mentioning often how he would like to move there. His chronic and severe agoraphobia made that virtually impossible.

Another curiosity about Louvain was his hypochondria, which interpreted every cough as a sign of pneumonia and each headache a sign of brain tumors. Yet when he actually did become sick with diabetes in 1938 he refused treatment. In 1941 he went blind and committed suicide soon after.

Louvain’s Mars was dubbed a “World of Magic and Super-science” and it certainly lived up to that! It was a place where the two most common ways of traveling long distances were ornithoptor and flying carpet. Soldiers as a matter of course carried swords, while “electric rays” were the artillery of choice. Trains were unknown, although vast caravans of saurian beasts carried goods from city to city—whose towers sometimes reached a mile in height. The mechanical wonders of Mars—or Quaphre as its inhabitants call it—include huge mechanical spiders, machines eyes surgically grafted in human beings and a drill that moves through rock the way a submersible does through water. Yet it is also a world where genuine wizards wield spells and where meeting an actual Angel or Demon is perfectly possible. 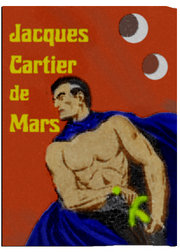 Interestingly, Quaphre apparently was some kind of limbo or purgatory. Its inhabitants nearly all followed a religion that said they were reborn souls who for some reason or other could not yet be judged—heathens who never heard the word of god, babies, a few (such as Cartier himself) who had been deemed worthy of a second chance. For that reason there was literally no connection between sexuality and procreation on Mars. Children were found rather than born, placed there by a Higher Power.

Cartier was a Napoleonic soldier with more than a few atrocities on his conscience when a stray bullet cut him down in 1813. That was when an angel named Pytheal appeared to him, offering the warrior a chance to redeem himself by helping save an entire world. Cartier agreed, and awoke beside a canal on the planet Mars. Pytheal made several other appearances in the books, often behaving enigmatically.

The actual character of Jacques Cartier as portrayed in the books is much more instrospective--and savage--than the square-jawed hero of the radio shows and film adaptations. He is melancholy much of the time, gets drunk, can be ruthless in the extreme, yet has flashes of extreme sentimentality. He feels the weight of his own past actions very heavily, and as a result will sometimes go to elaborate lengths to avoid casualties, using the minimum force needed to achieve his ends. Yet it battle he is relentless, even vicious at times.

Three characters dominate the series alone with Cartier himself, appearing in nearly every single story.

First was Lady Amille, a green-skinned aristocrat from the Nation of Air (Mars has four nation-states, each named for one of the four elements), with whom Cartier eventually fell in love. At first they did not get along in the slightest, but at last she chose him as her mate (women did the proposing among the "Greens," or Air People).

Second was Zochenko, the wizard responsible for Cartier coming to Mars—a brilliant but troubled man trying to save his world from a great evil. Like all inhabitants of Fire, Zochenko was golden in color, save that his hair was turning silver due to great age. There are a few hints in the books that he remembers his past life on Earth, and that he is pershaps famous or infamous.

Third was the evil that worried Zochenko—Professor Malle, a worshipper (perhaps lover) of the beautiful demon Belphael. Malle seized power in the nation of Water, ruling over the red-skinned people there with an iron fist. A genius, he never stopped inventing diabolical threats to the rest of Mars.

The series was mostly episodic in nature, but the books followed Jacques Cartier through a progression of dangers and locations. Editors were somewhat haphazard in their choices of titles, and sometimes the difference in translation between French and English editions (for example) proved startling:

In fact, since the stories were really meant to be read more-or-less continuously, the divisions into books was very nearly arbitrary.

Aficiodos of the series claim one reason it retained a following long after such contemporary stories like Rocketship Z-12 faded into obscurity is its relatively mature themes. Louvain was extremely well-read and readers have found plenty of clues to exactly that. More than one essayist has compared Jacques Cartier to Dante's Inferno, especially with the tie-ins of sin carried through from this world to the next. They also point out that Professor Malle, the diabolical and seemingly-immortal villain of the books, comes across at times sympathetically. For example, even Cartier himself finds himself feeling sorry for his nememis upon learning he was born a wingless freak among the Bat-People of the South Polar Regions. And the elements of horror throughout, while titillating, are also genuinely disturbing. Louvain created monsters that injected larvae into human hosts that then ate their way out. He also had Professor Malle invent a disease that brought on a kind of violent madness aimed at the victim's loved ones. Malle's horrific creations as often as not began as men, and the stories on occasion make that very clear.

During the Second Great War a radio producer in New Orleans hit upon the idea of producing a weekly series based on the Jacques Cartier books, which his son read. The pulp novels had all the elements that seemed perfect for a successful show, so he contacted “Fantastique” and purchased the rights. 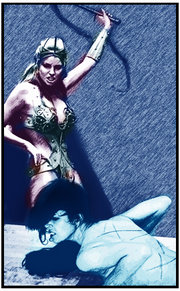 An infamous Fournier illustration from the comic book

On October 9, 1940, the program Les Adventures de Jacques Cartier premiered and became a hit in both Louisianne and New Francy. By Summer, 1941 an English language version was being broadcast out of New Amsterdam and a Kemrese one from Castreleon. The shows, in various forms and casts, remained on the air until 1953. The stories, while keeping the characters and many incidents (such as the (in)famous “Arena of the Giant Robot Gladiators”) tended to avoid some of the more mature themes—such as the notion of Mars as a kind of afterlife, or the hints of sexuality which lace the books (albeit in a somewhat subtle, almost neurotic form).

A pair of movie serials were produced in the 1940s: Jacques Cartier and the Underground City and Jacques Cartier Conquers the Solar System which if anything had even less to do with the source material. They were also made on a budget of astonishingly tiny size and it shows. Yet many fans first discovered Jacques Cartier through these serials and retain fond memories of same.

No less than five comic book adaptations were published in the North American League as well as Louisianne between 1955 and 1970. Then, in 1973 the avant garde comic artist Jean-Luc Fournier did his own version, one that instead of aiming for the lowest age of the audience tried to appeal to the most mature. Suddenly, the casual nudity described in the books was present, and details that veered towards the fetishistic (the whipping of Lady Amille while Professor Malle watches for example) were depicted in all their glory. The monsters looked more disturbing, with their blend of mechanical and organic like nothing that had ever gone before.

As a direct result of the Fournier comic books, Louisianne filmmaker Henri Vadim made the first big-budget film version of Jacques Cartier in 1976. Although it has retained its status as a cult film, Captain Jacques Cartier was not a financial success, barely making back its production costs. Critics decried its incomprehensible script and the cheesy special effects. Fans of the series complained about the liberties taken with the source material—making Zochenko and Malle ex-lovers for example.

It was not until 1988 that another attempt was made to film Jacques Cartier, this time from producer Vito DeLaurentis. His Jacques Cartier de Mars did much better at the box office, which some attribute to the all-star cast chewing the lavish scenery into sawdust. It was a juvenile romp that didn’t try to pretend to be anything else, but disappointed fans of the books.

Poster for the Delaurentis film

Thorne House began re-issuing the entire series in hardback in 1990, lavishly illustrated by some of the best fantasy artists in the field. Although fairly high-end, they sold well and inspired a line of paperbacks. Since 1994 Jacques Cartier calendars have become available, along with an increasing number of fan-published newsletters, short stories, poetry and artwork. Two major biographies of H.P. Louvain have been published since 2000.

Several writers of fantasy and speculative fiction have acknowledged their debt to the stories of Jacques Cartier, including Eugenio Roddenberry, Andrew Smith as well as the twin brother filmmakers Georg and Lucas Spieldorf.

Reaction to the books continue to be mixed. The Alliance for Public Decency (predictably) decries the author and the works themselves. More than one psychologist has suggested Louvain managed to exorcise a lot of personal demons in his stories--or wallow in them, depending on your viewpoint. Certainly Jacques Cartier himself is about as polar an opposite from his creator as can be imagined. And some point out that Professor Malle's monsters--with their long tentacles, multiple be-fanged mouths surrounded by fur, prehensile tongues, etc.--are the stuff of adolescent fears of sexuality.

Talk continues periodically about a new film version, although many speak of the possibility of an animated feature to capture the sheer scope and outre sensibility of the books.