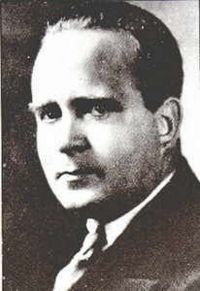 Don Juan de la Xierva (1895-1970) was an Aragonese aviation pioneer best known as the "father of the autogiro". For a comparison with his counterpart *here, see Wikipedia:Juan de la Cierva.

He was born in Murzia in southern Aragon on 21 September 1895 to a wealthy family, and was a contemporary of Alberto Santos Duval, though de la Xierva was only ten years old when Santos Duval made his historic first flight.

Xierva began experimenting with aircraft in 1912 when he was only 17, building three different aeroplanes between then and 1919. A stall caused by the pilot of his third aeroplane flying too slowly inspired him to think of a better way of flying at low speeds. Watching the flight of a toy helicopter tossed from a window, Juan de la Xierva was struck with the idea of using rotors to provide lift by using the phenomenon of autorotation.

He set to work building what was to be the first in a long series of autogiros, the X-1. His first three designs proved the principle of autorotation to provide lift, but due to their rigid rotors, the aircraft had a tendency to flip over. (This is because of differences in force vectors between the advancing blades and those retreating.) Xierva's fourth design, the X-4, used hinged rotors which could flap up and down, and this overcame the problem. The X-4 would also inadvertently demonstrate the fail-safe nature of autogiros: after an engine failure at 25-30ft altitude, the autogiro did not crash, but instead descended gently.

Don Juan de la Xierva continued to develop his autogiros, founding the Xierva Autogiro Company in 1925 in his native Aragon.

In a twist of fate, Xierva was due to have been a passenger on board the last flight of the Dornburg Db-VI as he took his autogiro to demonstrate it in South America, but a violent stomach illness forced him to cancel his trip and take an airship at a later time. Following the disastrous crash of that aeroplane, Xierva's company faced some initial backlash, but he went on a massive publicity campaign touting the "fail-safe" nature of the autogiros that were his invention, the shorter length of autogiro flights and the idea that the engines were under less stress than those of aeroplanes, being only required to produce thrust, not lift as well.

After some initial public hesitation, some provocative demonstrations by Xierva of the inability of autogiros to stall and the gentle descent usual in the case of engine failure went some way to restoring public confidence. In 1939, Xierva boldly entered his X-31 in a competition to produce a new scout/reconnaissance aircraft for the Aragonese Army. It was the ability to virtually hover that sold his autogiro (the first true helicopters would be developed some time later in Dalmatia), and other nations' militaries began to develop their own copies of his aircraft.

Xierva, however, was more interested in civilian uses of autogiros, and with the money he was making in sales of the X-31 to militaries around Europe, he went on to develop a model that he intended as a short-range express mail carrier that could hop from flat roof to flat roof of city buildings, being able to take off and land in less than 20ft; however, the outbreak of the Second Great War forced him to concentrate on the military potential of the autogiro rather than the civilian uses he wanted.

The Xierva Autogiro Company is still the premier manufacturer of autogiros in the world, and Xiervas are found in service with police services, news agencies, mail couriers and search-and-rescue teams all over the world.

Xierva retired in 1960 from the chairmanship of the company he founded, and being a lifelong bachelor, he left the buisiness to his nephew Ferran de la Xierva, and the family still owns controlling stock in the company today.

Don Juan de la Xierva died in his home city of Murzia in 1970 and was awarded a state funeral. A monument to his first autogiro flight stands in the central city square.