Apex Productions was one of the giant production companies in the NAL motion picture industry from the silent era through the 1960s when the company filed for bankruptcy. It was later bought by BBC America Studios LTD. 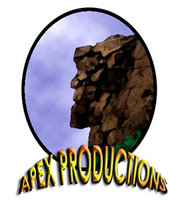 In the golden age of cinema, Apex Productions quickly rose to the top as one of the highest quality, highest volume producers of cinema in the Commonwealth.

In a great coup for the theatre famed director Dewidd Llewelyn Wark Griffydd (billed as D.W. Griffydd) agreed to produce films with Apex. Following his famed (and controversial) releases of The Birth of a Nation (1915) and the subsequent film Intolerance (1916), his fame seemed assured and the directors of Apex were hopeful in his capacity and did as much as they could to support him in his directorial whims.

While his lavish budgets were in part his reason for leaving his prior production company and joining Apex, his first three films with them met great financial success. Features from this period include Broken Blossoms (1919), Way Down East (1920), and Orphans of the Storm (1921).

Despite being one of the darlings of the golden age of cinema, Apex saw a decline in its fortunes, losing top directors to other production companies that were in vogue at the time. For a short time in 1961, it seemed that Antoin Aleisandr Lloneir and Doris von Kappelhoff would be signed to produce "That Certain Something", a sign of possible redemption of the failing production house. When the deal fell through, however, Apex Productions quickly filed for bankruptcy.

Apex Productions was "re-branded" to make it more modern in 1987 after years absence from film and screen. This new iteration of Apex is more focused on adult entertainment types, e.g. action, horror, and mystery genres. Modern Apex films are rarely classified below a 12A. Apex has not yet filmed an R18 film, and is not expected to do so.

Among the films that Apex has produced are "Assault on Rentax", "Duplicant", "The Sirens of Titan", "God Bless you Mr. Rosewater," "Schizophrenia" and "Sir and Lady Jones."

A film adaptation of Kolchek's Universal Kawars billed as "K.U.K." is expected for film release in 2011.