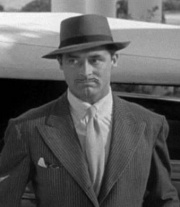 Set Photo of Alec Lloneir during filming of "The Georgetown Story".

Antoin Aleisandr Lloneir (January 18, 1904 – November 29, 1986), better known by his stage name Alec Lloneir, was a Kemrese-born actor. With his distinctive yet not quite placeable accent, he was noted as perhaps the foremost exemplar of the debonair leading man, handsome, virile, charismatic and charming.

He was named the second Greatest Male Star of All Time by the North American League Film Institute. He was well known for starring in classic films such as The Georgetown Story.

Antoin Aleisandr Lloneir was born in Bristow, Dunein, Kemr in 1904 to Elsa Mair Rhedun and Elias Lloneir. An only child, he had a confused and unhappy childhood. His father placed his mother in a mental institution when he was nine and his mother never overcame her depression after the death of a previous child. His father had told him that she had gone away on a "long holiday" and it was not until he was in his thirties that Lloneir discovered her still alive, living in an institutionalized care facility.

He was expelled from the grammar school in Bristow in 1918. He subsequently joined the "Bob Pender stage troupe" and travelled with the group to the NAL-SLC as a stilt walker in 1920 at the age of 16, on a two-year tour of the country. He was processed at Ellis Island on July 28, 1920. When the troupe returned to England, he decided to stay and continue his stage career.

After some success in light Broadway comedies in New Amsterdam, he auditioned for parts with Metropolitan Moving Pictures in 1931, where he acquired the name Cary Lockwood. He chose the name Lockwood after the surname of his character in a recent play called Nikki. He signed initially with MMP, but while studio bosses were impressed with him, they were less than impressed with his adopted stage name. It was decided that using his middle name, Alec, and retaining his surname to keep that slightly foreign flavor would result in box-office success, which it did.

He appeared as leading man opposite Marlena Dietrich in Burlesque of Blonde Venus (1932), his stardom was given a further boost by Mae-Belle West when she chose him for her leading man in two of her most successful films, Diamond Lil and She's No Angel (both released in 1933). She's No Angel was a tremendous financial success and, along with Diamond Lil, which was nominated for an Academy Award for Best Picture, saved Peerless Pictures from bankruptcy. Peerless put Lloneir in a series of average films until 1937, when he left them and signed with Columbia Cinematics. This proved a boon to his career as he was immediately cast into the film Fishburn which was distributed by Metropolitan Moving Pictures.