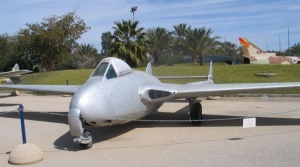 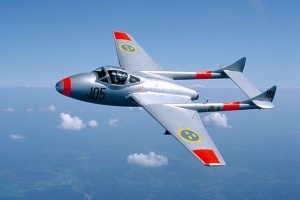 The Australasian developed jet fighter, the Tirikatene-Havilland Ao-whetuma is an unusual design which has entered widespread use across the globe.

Largely considered an experimental design as part of the ANJAC Air Force's early experimentation with range of ideas for jet propelled air-craft, the Tirikatene-Havilland Ao-whetuma .99 design initially seemed unlikely ever in favour of more conventional designs with twin engines. In the wake of Air Force R&D prototype of a more powerful form of jet engine in 1994 the military re-evaluated the unusual entrant and following promising performance projections compared to other designs being considered the Ao-whetuna became the sole jet-fighter project of ANJAC airforce in 1995.

The design underwent refinement throughout its development cycle and hit a number of both technical difficulties and administrative problems in the co-operation of various militaries and the privately owned Tirikatene-Havilland company. The design was refined to include many advances in materials technology by the airship oriented Tirikatene-Havilland technicians against the initial will of the aeroplane focused ANJAC engineers. However the final design, the Ao-whetuma .100 entered prototype production in late 1996 at the Tirikatene-Havilland aeroworks outside Auckland and in the spring of 1998 the prototype flight was undertaken. A series of test flights followed, including high speed crossing of the ocean between Aotearoa and Australia proved the Ao-whetuma's capabilities and the production model, the Ao-whetuma-6 was officially unveiled to the public at the Auckland airshow marking the second anniversary of the coronation of Diana I as Te Kuini te Aotearoa in 1999.

The Ao-whetuma officially entered service with the airforce of the ANJAC in 1999 with the majority of planes ordered by the Australasian Air Forces. The plane has yet to see active service directly on behalf of Australasia but has taken part in Commonwealth military and peacekeeping action in the Contonese War of 2003 and Florida War of 2004.