Western Europe is essentially a cluster of peninsulas on the western-most edge of Eurasia. Due to the impact of the Gulf Stream, it is noticeably warmer and more fertile than Eastern Europe. It is also the location of several major nations, including the Federated Kingdoms, the Scandinavian Realm and (although nowhere near as prominent as formerly) the Holy Roman Empire as well as France, Italy, Ireland, etc. This part of the world was also the major battleground for the First and Second Great Wars. Most nations in Western Europe speak some form of Romance, Germanic or Celtic languages. The dominant religion is Christianity. 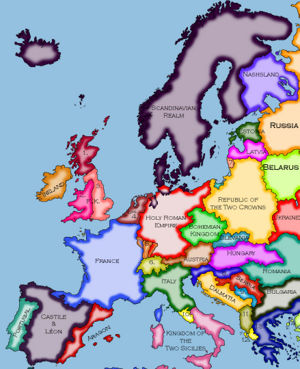 N.B: Nations not numbered or otherwise labeled on the map are Andorra, Armorica, Danzig, Fenwick, Monaco, San Marino, Saugeais, and the Monastic Republic.