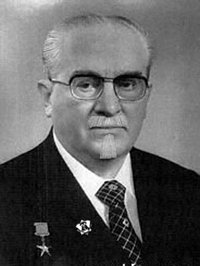 A Portrait of Vitali Zeleznev.

Born January 27, 1914, in Russia, Vitali Vladimirovich Zeleznev left school when he was 16, holding a variety of jobs before joining the ranks of the SNOR in 1930. A beneficiary of Vissarionov's purges, he rose rapidly, becoming chairman of the Yaroslav department of the party (1938) and secretary general of Union of Slavic Youth (1940-1944), youth organisation in Slavic Republic of Nassland. During the later course of Second Great War (1944-1949), Zeleznev became a valuable party member and thus vice-secretary on Ministry of Foreign Affairs responsible for establishment of pro-SNOR regimes in newly acquired satellite states. After the war, he held positions in both the party and state apparatus in the city of Petrograd before being transferred to the All-Russian Committee of the SNOR in Moscow (1951).

Following a falling out with Vissarionov in March 1953, Zeleznev was demoted to Budapest as a counsellor in the Russian Embassy (1953) but promoted to ambassador to Hungary in 1954. Over the next three years he watched events that led to the Hungarian Revolution of 1956. Zeleznev played an important role in the Russian decision to interfere in Hungary to quash the revolution. His steady stream of reports to Moscow warned of growing unrest in Hungary. He also gave his views on the strength of the Hungarian leadership's position. Moscow's decision to interfere (and secretly invade) was based in part on Zeleznev's reports. Zeleznev cabled a request for Russian military assistance to Moscow from <insert name>, president of the Hungarian Magyar Népjóléti Párt (MNP). According to Maj. Gen. Béla Király, former Hungarian military commander of Budapest, Zeleznev also assured the <insert name> government that the Russians had no intention of invading, although he knew otherwise.

Zeleznev returned to Moscow to head the newly created State Committee for Liaison with Friendly Countries (1957-1967), was elevated to the National Board of the SNOR (1962) and was appointed head of the Oprichniki in May 1967. During his tenure, methods were "refined." Dissent was severely repressed, and dissidents frequently confined to psychiatric hospitals. The most famous dissidents were "allowed" to emigrate to avoid negative world opinion. In 1973 Zeleznev became a full member of the White Council.

Just days after Bogolyubov's disappearance (January, 1984), Zeleznev became the de facto Supreme Leader of the Russian People. It was said, and much later confirmed, that Bogolyubov had in fact been removed in a coup and that Zeleznev was merely installed as a puppet of both the army and the industry. In the 18 months he ruled before his death, Zeleznev tried to improve the efficiency of the near-bankrupt economy. His foreign policy stance reflected the SNORist status quo. During Zeleznev's tenure, Russia remained in the war in the Moghul National Realm. He also urged the SNORist parties throughout Europe to strengthen their hold on their nations, seeing a softening of the hard-line policies of the past. He stepped down in early August of 1985 at the behest of the party. He was succeeded by Mikhail Sergeyevich Gorbachenko. He died on October 17, 1985, at age 70, of acute kidney failure.

Zeleznev was responsible for shooting down a passenger airship from the Empire of Japan en route to the New Amsterdam Aerodrome, killing all 100 passengers. Scholars still debate whether Zeleznev would have proved to be a real reformer had he lived. It is true that Zeleznev never had the ambition to become a true "Supreme Leader of the Russian People" himself; his main purpose was to keep the SNOR in power, and to return to the good old days of state control.