Timur Chess is an extended chess variant played extensively in Central Asia. Its invention is attributed to the Ämir Timür himself, and certainly it was played in his courts.

Since that time, Timür Chess has undergone several swings in its popularity and at least one revision, but essentially the same game is still played today.

The mediæval game was played on an 11x10 board, with 17 major pieces and 11 pawns to each side. A unique form of pawn promotion meant that there were in essence 11 different types of pawn, and the modern game has preserved this feature.

For more about the original Timür Chess game, see here.

Modern Timür Chess is played on a 12x10 board, with the addition of a "Bodyguard" or "Swordsman" on the King's right. The 'citadel' squares remain, with the same rules governing them, and the pawns still promote according to type.

The pieces are as follows: 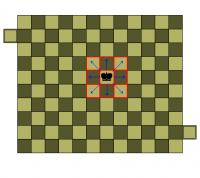 The King (Persian: Shāh, InterTurkic: Şah) is essentially the same piece as in Western Chess; however, in Timür Chess there is no castling. When the King is placed in check, however, once per game it may be exchanged with any friendly piece not currently threatened. If multiple Kings are in play, the player is able to move into check. 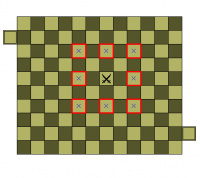 The Swordsman (Persian: Shāmshīrgar, InterTurkic: Güzätçi- "Bodyguard") moves by leaping two squares orthogonally or diagonally; it is essentially a combination of the Dabbaba and Elephant pieces. 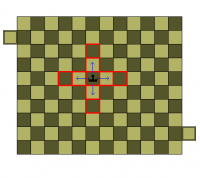 The Ferz (Persian: Farzın, InterTurkic: Färz) of modern Timür Chess may move one space orthogonally as the old Ferz, but may also capture (but not move without capturing) at a distance of two squares orthogonally. It may not jump over other pieces. 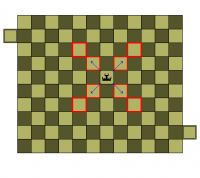 The Wazir (Persian: Wāzir, InterTurkic: Vizer) of modern Timür Chess may move one space diagonally as the old piece of the same name, but may also capture (but not move) at a distance of 2 squares diagonally, in a similar way to the Ferz 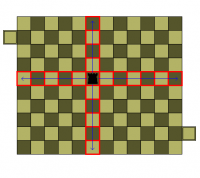 The Rook (Persian: Rukh – "Chariot", InterTurkic: Ruq) is the same piece as in Western-style Chess, moving any number of spaces orthogonally. 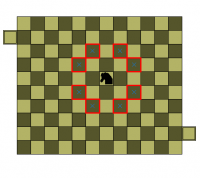 The Horse or Knight (Persian: Faras, InterTurkic: At) is the same piece as the Western Knight. It is the first of numerous 'leaping' pieces in Timür Chess, alongside the Camel, Elephant and Dabbaba. 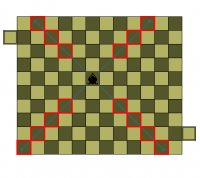 The Taliah, or Picket (Persian: Talīah, InterTurkic: Talaı), is analogous to the Western Bishop. Mediæval Timür Chess placed both of these on the same colour squares, with the other player's Taliahs on the opposite colour; thus, the opposing player's Taliahs could not be captured by your own.

The Taliah moves as a Bishop, any number of squares diagonally, but it may not move only a single square. 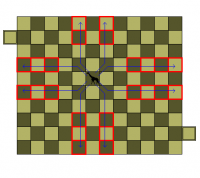 The Giraffe (Persian: Zurāfah, InterTurkic: Zırafa) has probably the oddest move for those used to Western chess pieces. It slides one square diagonally and then two or more squares at a 45° angle orthogonally. It may not leap over other pieces. 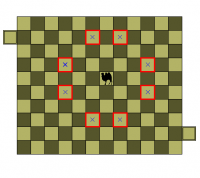 The Camel (InterTurkic: Tüyü) moves as an extended Knight, 'leaping' one square orthogonally and three squares at 90° to that direction. 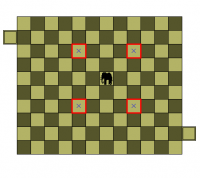 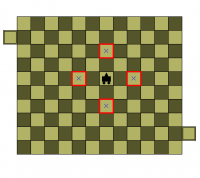 The Dabbaba, or War Engine (Persian: Dabbāba, InterTurkic: Dabab), leaps two squares orthogonally, and is the counterpart of the Elephant. 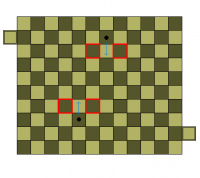 The 10 Pawns (Persian: Piyādeh, InterTurkic: Baydaq) move as in Western chess, with the exception that the extended first move of pawns is not allowed. Each pawn is of a different 'type' and promotes at the last rank to its own type of piece; thus, the Dabbaba's Pawn promotes to a Dabbaba, the Rook's Pawn to a Rook, the Ferz's Pawn to a Ferz, and so on. The King's Pawn promotes to a Prince, which functions as a "spare" King.

Most of the pieces that Timür Chess has in common with Western chess are similar in appearance to the Western pieces. The Rook, the Horse, and the Pawn of Pawns are identical to the Western Rook, Knight and Pawn. The Taliah is very similar to the Bishop, though it is usually flattened like a spear point and lacks the slot common in Western Bishops. The Camel follows the same design principle as the Horse: a camel's head on a base. The Elephant and Giraffe are represented by miniatures of the animals in question, and the Dabbaba is normally represented by a siege tower. The King looks similar to the Western King, but typically has a plain spike in place of the cross typical of the Western piece. The Wazir and Ferz both share more similarity with the Western Queen than the Western King; and differ only in the sign on the central point of their crown. These tend to run in pairs: sun (usually a disk or ball) and moon (a crescent), cross and crescent, or cross and saltire are all common pairings. Lastly, the Swordsman, which resembles a stylised ancient warrior's helmet, often with hornlike or winglike flanges at either side.

Board and Starting Layout

Timür Chess is played on a 10x10 board, with the addition of two 'citadel' squares, one each on the right side of each player's second rank. Only the King, or an Adventitious King (second-time-promoted Pawn of Pawns), may enter these. Entering the opposing player's Citadel forces a draw; the Adventitious King may enter your own Citadel to block the entrance of his King.

The tenth pawn, located on the player's extreme left, is the Pawn of Pawns. Upon reaching the tenth rank, the Pawn of Pawns remains in place, immune from capture, until a situation arises in which a pawn forks two pieces, or a piece's capture by a pawn cannot be avoided. At this time, the Pawn of Pawns is returned to the location from which this attack can be made, whereafter it moves as a pawn again. Upon reaching the tenth rank a second time, it is promoted to become an Adventitious King: a second King which may block your own Citadel from being entered by the opposing King.

The traditional player colours for Timür Chess are not Black and White, but Red and White. At times this lent a political dimension to the game, and Timür Chess imagery was often used on early pro-SNOR propaganda posters.

Starting layout is somewhat variable. The classic starting position, used for teaching and basic play, is shown above. White's pieces, from left to right, are:

In higher-level games, players may set up their back row pieces (Elephants, Camels and Dabbabas) in whatever arrangement they choose. This adds a unique dimension of strategic play to the game, especially since the placement of one's back pieces is done 'blind', with a screen set in the middle of the board for this purpose.

Timür Chess has been played almost continuously in Central Asia since its development in the XV Century from Western chess' immediate precursor Shatranj, a Persian game developed from the earlier Indian form Chaturanga.

Since then, the game has continued to be played on at least a regional basis and though there have been fluctuations in its popularity, Central Asians, particularly in Turkestan, Uyguristan and Persia, often prefer this variant of chess to all others.

With the Swordsman being such a relatively recent introduction, many variations exist concerning his moves. The most common variant Swordsman moves as a combination of the extended Ferz and Wazir pieces. Occasionally, a Western-style Queen is substituted, or others: the Panther (combination of Horse and Camel), Tiger (diagonal equivalent of the Giraffe) or Khan (combination of Ferz and Taliah).

Other variants include the formerly popular "Sarts and Nomads" version, in which one side (the Sarts) replaces its Horses and Camels with a second pair of Taliahs and two additional Swordsmen, and the other side (the Nomads) replaces its Taliahs and Swordsman with two Panthers and a Khan.