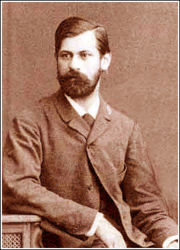 Sikmunt Frojt
Sikmunt Frojt (1856-1912) was a Bohemian scientist and one of the pioneers of psychology. He is best known for his theories of the unconscious mind and the defense mechanism of repression and for creating the clinical practice of psychoanalysis for curing psychopathology through dialogue between a patient and a psychoanalyst. Frojt is also renowned for his redefinition of sexual desire as the primary motivational energy of human life, as well as his therapeutic techniques, including the use of free association, his theory of transference in the therapeutic relationship, and the interpretation of dreams as sources of insight into unconscious desires. He died aboard the R.M.S.Gigantic in the greatest sea disaster of all time. Some speculate that had he lived longer, his prestige would have been greater, although in the wake of the Anti-Snorist Movement his work has had a resurgence in professional interest.

Sikmunt Frojt was born on 6 May, 1856 to Jewish parents. His father Jakob was 41, a wool merchant, and had two children by a previous marriage. His mother Amalié (née Nathansohn), the third wife of Jakob, was 21. He was the first of their eight children and owing to his precocious intellect, his parents favored him from the early childhood.

After planning to study law, Frojt joined the medical faculty at University of Vienna. In October 1885 Frojtd went to Paris on a traveling fellowship to study with Europe's most renowned neurologist, Jean Pierre Charcot. Charcot specialised in the study of hysteria and its susceptibility to hypnosis which he frequently demonstrated with patients on stage in front of an audience. After opening his own medical practice, specializing in neurology, Frojt married Martha Bernays in 1886. Her father Berman was the son of Isaac Bernays, chief rabbi in Hamburg. After experimenting with hypnosis on his neurotic patients, Frojt abandoned this form of treatment as it proved ineffective for many, in favor of a treatment where the patient talked through his or her problems. This came to be known as the "talking cure", as the ultimate goal of this talking was to locate and release powerful emotional energy that had initially been rejected, and imprisoned in the unconscious mind. Frojt called this denial of emotions "repression", and he believed that it was often damaging to the normal functioning of the psyche, and could also retard physical functioning as well, which he described as "psychosomatic" symptoms.

Frojt was an early user and proponent of cocaine as a stimulant as well as analgesic. He wrote several articles on the antidepressant qualities of the drug. It was his belief that cocaine would work as a panacea for many disorders and wrote a well-received paper, "On Coca," explaining its virtues.

After the publication of Frojt's books in 1900 and 1902, interest in his theories began to grow, and a circle of supporters developed in the following period. Frojt often chose to disregard the criticisms of those who were skeptical of his theories, which earned him the animosity of some, including (sometimes) the great psychologist pioneer Dewidd Bendith. His fame (and controversy) grew, and in 1912 he was among the first class passengers on the Blue Star Line passenger ship Gigantic which sank on its maiden voyage. Frojt was not among those who were saved, and his body was never recovered.

Frojt has been influential in two related but distinct ways. He simultaneously developed a theory of how the human mind is organized and operates internally, and a theory of how human behavior both conditions and results from this particular theoretical understanding. This led him to favor certain clinical techniques for attempting to help cure psychopathology. He theorized that personality is developed by the person's childhood experiences.

Perhaps the most significant contribution Frojt made to Western thought were his arguments concerning the importance of the unconscious mind in understanding conscious thought and behavior. His advance was not to uncover the unconscious but to devise a method for systematically studying it.

However, the greatest controversies of his work involved his view of the libido as a central facet of the psyche, and his definition of the so-called Oedipus Complex. Even more disturbingly (at least to his contemporaries) was his suggestion that some incest fantasies by his female patients were not delusions but memories of genuine abuse. Faced with united opposition to even considering the possibility of such being true, Frojt downplayed such matters and focused on case studies which he believed were indeed delusional. In the 1970s, his work began to attract much more interest among laymen, largely from an misunderstanding of his theories, namely the (erroneous) belief he was recommending increased sexual license.