The Petticoat Scandal of 1870 was a controversial series of events and accusations that ended the political career of Giles Rupert, then-Moderator of Ontario and dealt a severe blow to the Provincial Whig Party that lasted a generation. 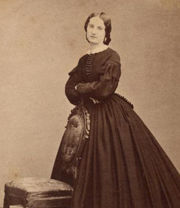 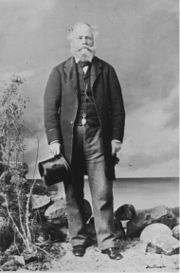 At the center was the scandal was Antonia Ford (1838-1871), a woman introduced as the niece of Hugh Allan (1810-1882), then-president of the Great Northern Railroad Company. In fact her story was far more complex. A Carolina native, Antonia's family had been rendered destitute. She had found a way of settling her family's debts by acting as an intelligence agent for the Great Northern. While popular imagination has held that she became the mistress of several government officials, the evidence suggests rather that she recruited others to gain information, including domestic servants and at least one fiancee of a Cabinet Secretary. She allowed herself to be wooed as well, most famously in Toronto by Giles Rupert himself, from 1869 until shortly before her death.

From her diaries (published in 1922), it appears clear that Ford herself was only directly engaged in the collection of information for her employers. However, she certainly suspected the other side of this operation--identifying officials amenable to bribery and/or blackmail. Blackmail in this case was directed at a young man in the civil service desperate to keep secret his family's connection to the Church of Jesus Christ of Latter Day Saints. This was a time when the Anti-Mormon Party was a factor in the politics of many provinces. Leonidas Burton (born 1840) died of poison in January 1870 and the official investigation into his death (eventually ruled a suicide) led to the discovery of a network of bribes for lucrative railroad contracts.

The resulting furor was intense, with the image of bribes and government documents carried "via petticoat" giving the scandal its name. Political corruption, the hint of sexual scandal coupled with some religious outrage combined create a firestorm that ended Giles Rupert's political career. By year's end, he was forced to resign. He never again held public office.

Antonia Ford herself died in a boating accident in June, 1871. Many dramatists and others have speculated that she was murdered, usually at the behest of Great Northern executives. An alternate theory is that she in fact committed suicide. Some have posited that Ford did not in fact die but instead made a new life for herself elsewhere.

Novels, films, songs, plays and even an opera have used these events as a backdrop, with Allan and/or Rupert usually taking on the role of villain.