The Pègre (a member of the pègre is a pegreu in English press, "pègreux/pègreuse" in Francien) is the name for a secret criminal association which evolved in the NAL especially in response to Prohibition.

"Pègre" is often used by extension to refer to any large group of people engaged in criminal racketeering activities (such as the Jewish Pègre, the Russian Pègre, the Caribbean Pègre, etc.) 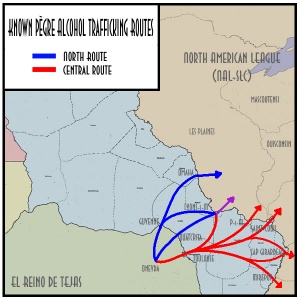 Until 1916, organized crime within the NAL was mostly a matter of various gangs, usually loosely organized by ethnic and familial ties. But Francophone criminal groups had a major advantage in the swelling trade of illegal whiskey, wine and other forms of alcohol. They often had contacts in either Louisianne or New Francy. More alcohol meant more money and money meant power, which translated into the ability to crush one's rivals--sometimes literally.

The fledgling CBI found itself increasingly on the front lines in the enforcing of Prohibition, which placed them in direct conflict with the Pègre, rapidly growing into a powerful network of big gangs. The 1920s was a time of great social change in the NAL as different political groups struggled to make sense of it all. Women had gained the vote. For the first time the NAL had taken part in a major European War. Telephone, radio, motion pictures and vastly expanded railroad systems (including a flood of mass transit rail systems) reshaped the country. Idealists of various kinds demanded the power to shape or impeded the changes underway, which in turn resulted in countless compromises including recognition of the rights of labor unions and the first national income tax. The world of crime was changing as well.

Gangs which had controlled a neighborhood or two in Chicago or New Amsterdam suddenly found themselves with contacts and members all over the country.

At first, their reaction to this was to simply run things as larger versions of the gangs, with the result that the NAL suffered a crime wave such as it had never known. First was a wave of murders, assaults and arsons to drive the non-Pègre gangs out of existence. Between 1917 and 1922, close to one hundred fifty murders related to gangster activity (usually territorial wars) were reported. Many of these were deliberately brutal, to an effort (often successful) to terrorize. The most famous of these, although one of the last, was the St. Patrick's Day Massacre in 1927, which was aimed at Pègre members. Parliament soon passed increased funding and authority for the CBI as direct result of that incident of mass-murder.

But "St. Pat's Massacre" was really one of the last gasps of the old guard within the Pègre. It heralded the change from criminal enterprises operated by gangs to those done by Familles or Families.

Following the repeal of Prohibition, various chapters of the Pègre were united in New Amsterdam under the leadership of Charles-Luc Gambeaux (1909-1992) who had become the most prominent figure in organized crime following the murder of Sylvestre Maupin (1878-1930). Gambon was a brilliant organizer, managing to forge a syndicate of the major factions within the Pègre, the so-called Four Families, into a body that was called The Tribunal.

While the era of Prohibition was coming to a close, there were still many lucrative illegal activities for the four families to divide up, including prostitution, racketeering, and gambling. Rather than risk turf wars over these, Gambeaux decided to establish a territory system. Under the territory system Gambeaux created, the activities the various crime families were responsible for were spelled out, as well as where they could pursue them.

By spelling out who had the rights to which territory, if one family grew ambitious and over-stepped their authority, they would not just declare war on one, but rather all the other families—a very dangerous proposition. Similarly, an outsider encroaching on the turf of one of the families would be declaring war on the entire syndicate.

The Famille structure of the Pègre allowed considerable stability for decades and made them a serious problem for law enforcement. During the Second Great War the Pègre consolidated a lot of its control over the NAL crimeworld simply because the entire country had its attention on other things, namely winning the war. The generation of Charles-Luc Gambeaux and their immediate successors were difficult to touch all during the 1950s, 1960s and 1970s because they offered substantial rewards for loyalty while punishing betrayal with inexorable violence. Yet they also maintained something of a code, which isolated to some extent innocent bystanders. Family members who were not part of the "business" were generally consider 'hands off.' The same was true in terms of law enforcement officials. When possible, deaths became disappearances. This created an aura of mysterious and sinister power, but not of random violence. As a result, public pressure to do something about the Pègre was not so intense.

But a problem developed as the same group of increasingly elderly crimelords remained in the top spots. First was that the world itself began to change and they found it increasingly more difficult to change with it. Second was the rise of the Youngbloods, a new generation of criminal leaders who were in their prime but relegated to secondary positions or middle management.

The skirmishes began in the 1980s and continue to this day. Sometimes the Youngbloods have succeeded in wresting authority from their elders, or even supplanting them altogether. Sometimes these younger gangsters have died or vanished (the Pègre old guard are anything but defenseless). Yet only in the Gambeaux Famille have the "old men" as they are called remained in absolute control. Given the extreme age of the Gambeaux Cardinals, this simply cannot last much longer.

So the amount of public violence has increased steadily for twenty years, along with the expansion of organized crime into areas like video piracy. "Law and order" have become an increasing demand from the electorate in provinces with a heavy Pègre presence. At the same time the Jean-François Young administration proved to be a major enemy of the Pègre and its allies within Louisianne.

More, the actual makeup of the Pègre is changing, as increasingly those with little or no Francophone background take up crucial positions--individuals with less belief in or adherence to the old code.

The Pègre actually has a fairly loose structure in some ways, with each Family having its own traditions and way of doing things. But certain constants exist.