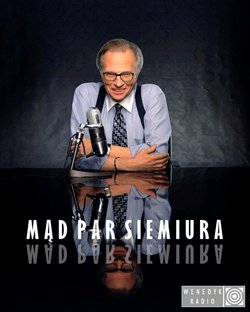 Mąd par siemiura ("The World in Half an Hour") is one of the most popular radio shows in Wenedyk Radio Warsina. It is mainly because of it’s host Waldemar Fiorarz.

Unlike many interviewers, Waldemar Fiorarz has a direct, non-confrontational approach. His interview style is characteristically frank and no-nonsense, but with occasional bursts of irreverence and humor. His non-confrontational approach attracts some guests who would not otherwise appear. Every day, Fiorarz interviews one or more prominent individuals, mainly celebrities, politicians, and businesspeople (including prof. Onute Staniszkiene, chancellor Jan Sacz, general Marek Aldendorf and many others).

The half an hour show is broadcast three times a day in some areas, and can be heard all over the RTC. Fiorarz's trademark is a vintage RCA microphone, on the desk. It is so popular that it had become a part of Fiorarz's TV show called by his own name “Waldemar Fiorarz”, although the microphone is a prop, as Fiorarz and his guests use lapel microphones.

Before 2004 the programme was known under the name Mąd par Ura ("The World in an Hour") and lasted twice as long as it lasts currently. Fiorarz was forced to limit his activity somewhat for reasons of health. In spite of his age, Fiorarz says he doesn't even think of quitting yet.