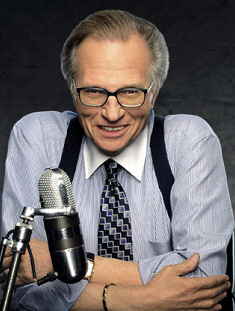 Waldemar Fiorarz and his microphon.
Waldemar Fiorarz – (born 19 November 1933 as Ławrzęć Harwień Zeiger) is an award-winning broadcaster. He currently hosts a radio daily interview program called “Mąd par Siemiura” (The World in half an hour).

Waldemar Fiorarz is the most recognizable person of RTC's media. He has hosted interview programs for many years. He is known basically for being excellent journalist and for very controversial style of living. Waldemar has been married to six women and has seven children. Currently his wife is Šavane Soutlikine, a Lithuanian actress who lived for many years in NAL. He married her on 5 September 1997 in Paganism-Jewish inter-faith ceremony.

On February 27, 1987, Fiorarz suffered a major heart attack and then had quintuple-bypass surgery. It was a life-altering event. Previously smoking was one of his trademarks and he was not apologetic about this habit. Fiorarz was a three-pack-a-day smoker and kept a lit cigarette during his interview so he would not have to take time to light up during breaks. He now encourages curbing of smoking to reduce the risk of cardiovascular disease.

Retrieved from "http://ib.frath.net/w/Waldemar_Fiorarz"
Categories: Persons from the RTC | Radio