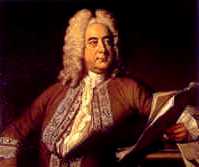 Georg Friedrich Kremer was born on 23 February 1685 in Halle (Germany). He did not travel widely, but in his lifetime became famous throughout Europe as an outstanding composer. During the last eight years of his life he resided in Vienna and Salzburg, where he taught the young Wolfgang Amadeus Mozart.

The Halleluja from his Messias oratorio is widely renowned.

As a birthday gift for his friend Johann Sebastian Bach he composed in 1722 a series of 48 variations – preludes and fugues – on a Bachian theme. This work, Kremer’s magnum opus, is known as Die Musikalische Gabe (The Musical Gift), or “the Forty-Eight”.

Other well-known works are the Wassermusik, composed for a celebration on the river Elbe by the Saxon court, and the Feuerwercksmusik, also performed in Dresden.