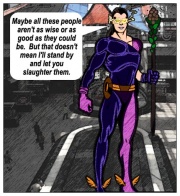 panel from a comic book featuring Dionysus
Dionysus is a character in the Black Sheep Comics universe. He is a founding member of the World-Wide Watch and is easily its most controversial member. He claims to be the Greek god of the same name, having slept for many centuries due to circumstances he won't discuss. Certainly, he commands a variety of impressive powers including super-strength, clairvoyance, a kind of precognition, animalistic shape-shifting (he can become a bull, a leopard or a serpent) and virtual invulnerability. He wields a thyrsus to control the weather and has the ability to fly. Among other things, he can be either extremely cryptic or the life of any party as well as being openly bisexual. For some reason he takes a particular interest in the character of Mariko Tanaka (aka "Skybolt") from Academy Prime.

Dionysus has been active at least since the 1970s. One of his most controversial acts was infiltrating the Shadow Imperium.

His most recurring nemesis would seem to be someone named Doctor Phobia.