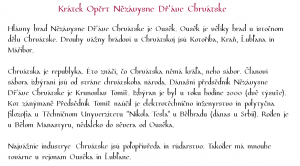 Until 1949, Croatian and Slovenian official documents and books were printed in a modernised form of the Carolingian minuscule script used in the Freising manuscripts of the 10th century, which are the oldest written attestations of Slovenian, and simultaneously, the oldest record of any Slavic language in a Roman script. Slovene and Croatian both used a form of Kurrentschrift as a cursive handwriting.

Croatian (along with Slovene and Dalmatian) writing underwent an official change following the establishment of the CSDS. As the then-existing writing systems were viewed as "bourgeois", laws were brought into force establishing the official use of a more modern typeface for all purposes; even so, in middle schools the older typefaces were still taught for secondary knowledge. Handwriting was reformed as well, with the new script being based on the older Kurrentschrift variants; the new scripts are very similar to the German Suetterlin-Schrift.

Following the collapse of the CSDS, the CSDS-era laws fell into disregard; In Croatia, both Slovene and Croatian have returned to using the pre-1949 typeface, but unlike in Dalmatia, where the modern style is still in common use, in Croatia the use of the Carolingian minuscule is universal in all applications, to the extent that many books that were published in the CSDS are being reissued with only the typeface being changed. However, the modified (simplified) cursive script introduced in the CSDS is still in widespread use, however schools are now teaching the pre-1949 Kurrent-Schrift once again, with a view to replacing the CSDS cursive.

Adjectives are shown in indefinite form unless such does not exist.

Translation of the text in the example of Croatian official print:

A SHORT DESCRIPTION OF THE INDEPENDENT STATE OF CROATIA

The capital city of the Independent State of Croatia is Ousěk (also known as Osijek). Ousěk is a large city in the eastern part of Croatia. Other important cities in Croatia are Kotořiba, Kranj, Ľubľana (Ljubljana) and Mářibor.

Croatia is a republic. This means, that Croatia does not have a king, rather a parliament. Members of parliament are elected by the people of Croatia. The current president of Croatia is Krunoslav Tomiť. He was elected during the year 2000. President Tomiť studied electrotechnical engineering and political philosophy at the "Nikola Tesla" Technical University in Belgrade (nowadays in Serbia). He was born in Běli Manastyr, not far to the north of Ousěk.

The most important industries of Croatia are agriculture and mining. Also, there are many factories in the regions of Ousěk and Ľubľana.