The Atmaranos (אטמאראנוס) were groups of Jews expelled from the Iberian Peninsula in the years after 1492 and who did not cross the ocean to Mueva Sefarad after the Ekspulsyon, but settled instead in the Atmar province of Xliponia.

These people exist as a distinct community to the present day, although it has in many ways become integrated to Xliponian culture. They tend to regard the citizens of Mueva Sefarad as excessively mystical and tied to traditions, adopting instead a more rational-liberal-elitist stance (though less so than German Jews).

Present-day Atmaranos affirm their group identity - especially in contrast to Muevasefaradíes - using a badge composed of a David's Star and the letters א (Hebrew aleph) and A. 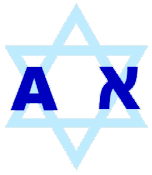