Adolf Hitler, a famous expatrié form the Holy Roman Empire led the creation of Alternate History, and was well noted in other artforms.

Born 20 April 1889 at Braunau am Inn, Austria. His parents were Alois Schickelgruber and Klara Hitler; he was the fourth child -- three siblings died during his early childhood and two more were born several years after him. His father was a customs offical by occupation and a strict disciplinarian at home. His mother was very loving by all accounts. The family moved several times before the turn of the 20th century, and his first calling was towards the priesthood. Later, his artistic talents would surface. His father died in 1906 of pleural hemorrhage and a year later, his mother died after a breast cancer operation.

Watercolour on pen and ink: Oedensplatz
After the tragic losses of his parents, he decided to leave school and remove to Paris to take up his other great dream of working as an artist. There he lived for several years in a small rented studio working feverishly. His works remained totally obscure, apart from one or two devoted buyers, his paintings would not really come to light until decades later when he would be recognised for his avantgardism and brilliant use of texture and shading. Most of his works -- and all of his best -- are dark and brooding pieces, thought to have been inspired by the deaths of his parents and several siblings. Apart from these darker works, he also did a series of gay city scenes in his beloved Vienna. 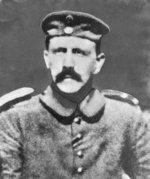 Adolf Hitler in the Bavarian Army

He left Paris in 1912 and went to Vienna hoping to gain admission to the college of art there. While wandering pfennigless in Vienna, and having been unable to gain admission to the prestigious art college of that city, he slept in bars and flophouses. He admired Jewish artists and performers of the city, but was removed from that environment by the ferment of Great War I. Rejected by the Austrian army as unfit to serve, he crossed the border to Germany and volunteered with Bavaria where he served with distinction in the horrors of the trenches for two years.

Having been awarded two Iron Crosses for his actions, he was discharged (due to injuries to his hands and eyes during a mustard gas attack) from the army. He was terribly affected by his experiences in the trenches and suffered for many years from "shell shock". Thereafter, he felt once again the calling of art and a great creative drive from his experiences both in the trenches and residual pain from the deaths of most of his family, but his injuries prevented him from continuing with his painting. Instead, he took up writing, mostly in the burgeoning science-fiction genre, where he found considerable catharsis from his earlier years.

Hitler the author.
The American craze for all things science-fictive prompted him to emigrate to the NAL in 1928. He took up residence in New Amsterdam, where the press of many folks and creeds spurred him to consider what he called "alternative histories". One of his most detailed alt-historical novels, The Dream of Iron, chronicles the rise in the fictional Empire of Zand of a sinister sort of nationalism that decried credal and ethnic variety, seeking in stead a kind of pure conformity. This "national socialism" eventually spills over the borders and into neighbouring lands. Drawing upon his experiences in GWI and the latent bigotry to be found against Gypsies and Jews in his native Germany, he paints a gruesome picture of genocide and racial purity in a war called Der Kampf taken to unholy extremes. The world can not but take notice as more and more countries fall to the Zandish blitzkrieg, or rapid warfare; and eventually, the world unites to defeat the Empire. Trench warfare combined with merciless land ironclads and hellish super-atomic weapons that vaporise whole cities and fantastic energy beams and magnetic generators lead to world destruction. It is only in a few out of the way places where humanity survives in order to rebuild; but the question of whether they shall have learned a lesson from this all consuming war is left unanswered.

The Dream of Iron 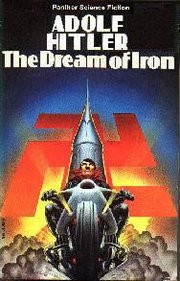 The Dream of Iron
Published in 1952, "The Dream of Iron" was a hit in post-GWII, post-Oriental War America. Other works include short stories set in Zand: "Memoirs of the Emperor" and "Rise and Fall of Zand"; as well as the posthumously published autobiographical novella "Mein Kampf", which chronicles Hitler's own struggles with mental illness, recovery from horrific warfare and coming to terms with the social ills of his native land.

Hitler died on 22 March 1973 in his New Amsterdam home. Never married, he is survived by his longtime partner Ruth Cohn and two children, Daniel and Clara.