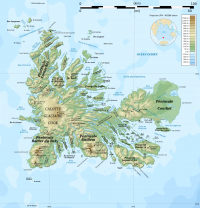 A Map of Kerguelen

Kerguelen in Francien, Cár Gouelen in Brehonecq, or X as it's called by the local population is an island in the deep southern Indian Ocean. It is a dependency of France but is nominally ruled by a Venedic company. The inhabitants of the island are of Montreiano and Tejan extraction, having survived a shipwreck on their way to settle Madagascar during the late 1800's.

The largest habitation is Port-aux-Français, but Montrei and Nueva Tejas serve as the second and third largest settlements. Warsine served for the capital at one point, but now remains a largely abandoned development with about 5 people living there consistently.

Kerguelen was first discovered by the Breton-French navigator Yves-Joseph de Kerguelen de Trémarec in February 1772. Soon after their discovery, the archipelago was regularly visited by whalers and sealers (mostly British, American and Norwegian) who hunted the resident populations of whales and seals to the point of near extinction, including fur seals in the 18th century and elephant seals in the 19th century. Since the end of the whaling and sealing era, most of the islands' species have been able to re-establish themselves.

It is somewhat unclear how a group of Montreiano and Tejano settlers came to be on the island1,2, but it is most probable that they were aboard a ship bound for Madagascar or some other Indian Ocean locale to establish a trading mission, but were caught in the current, and took to Kerguelen in hopes of survival, not knowing how far away other shores would be.

A few Icelandic whalers befriended the settlers, as it reminded the Icelanders of their own country, as did a number of Frenchmen from the Dordogne, and they helped the locals construct homes of dry-fit stone in using corbels to dome and otherwise shelter the home.

Catholic Priests visited the island a few times during the course of the the 19th century and found that the locals would often use water and cabbage leaves as a sort of sacrament private sacrament. It was not until the regular establishment of a French Science station that the construction of Notre Dame des Vents, the local chapel was constructed. To this day, most Iberic families celebrate a familial mass rather than attending church.

With the advent of the 20th century the population declined to nearly 150 inhabitants as many of the youth emigrated to mainland France or to any of the other countries of the world. By the late 20th century and early 21st century, Kerguelen has begun to profit from ecotourism, and some of those who had emigrated have returned, bringing the Iberic population to nearly 450, and with what appears to be a positive growth curve.

Among the Iberico settlers (as they call themselves), life is simple, living in dry-stone and sometimes turf dwellings. With the introduction of Bizet and earlier Icelandic sheep, the Ibericos have a supply of meat and wool. With the introduction of Icelandic sheep and some help from an Icelandic whaler some time in the 19th century, the Ibericos were able to gain a better foothold on the islands. Wood is prized highly, and is often given as part of a marriage gift.

Most Iberico clothing is made from leather or skins, but increasingly it has a large proportion of wool from the sheep raised on the islands.

In 1912 Port Bizet was established with a load of Bizet sheep imported from France that have been carefully husbanded for the last century. This has allowed for some self-sufficiency and an increasing capacity of the locals to wear clothing made from wool instead of furs and pelts as had been necessary prior to the introduction. The sheep are strictly maintained on Ile Longue and the other islands of the Golfe du Morbihan. It is not uncommon to see a flotilla of ships from Montrei and Port-aux-Français skimming the surf at dawn and dusk to care for the sheep.

Since the 1990's, efforts have been made to establish wind-farms and greenhouses to better feed and clothe the locals, allowing for an increase in the local population due to better health-care and other quality of life improvements. Extensive use of walipinis in the Peninsule Courbet have helped in a dramatic reduction in scurvy. Plans are being discussed to allow for an appropriate airfield and hangar to be established, to increase frequency of resupply missions. With the increased cargo capacities of an airship, it may also be possible to provide the region with a Tesla Generator.

A group of Montreiano and Tejano castaways arrived on the island at some point in the mid 1800s, however, as no records were kept, the closest dating suggests in the mid-1850s. The little wood brought in their ships become an instantly rare and precious commodity, used for art. Their homes are similar to the croft houses of Ireland, made from piles of stone. Due to the scarcity of materials for fires, any bushes and other woody plants were encouraged to grow, and protected at all costs. Wood was gathered and shared liberally among the survivors and their descendents. Through much of their early time on the island, cabbage, seaweed, and later beets and hardy potatoes were their mainstay, and this was augmented by those fish, crawdads, local fowls and sea mammals (sealion, etc) that they could trap. Clothing was made from seal fur and the skins of any of introduced animals (rabbit, cat, sheep and reindeer).

The language's demonym is X, and it is something akin to any of the Castellano daughter languages, but with heavy Venedic and French borrowings.

Naed for the renown Cár Gouelen, Stronghold of the Gull, ultimately named for the famous Cár Gouelen, an impressive stone manor house in Brehun (just north of *here*'s Morlaix). Anymore, it is hired out to tourists as a sort of bed and breakfast. The manorhouse itself burned and was rebuilt in the 1890s, but the new house sits on the foundations of the 15th century manorhouse and there is also the ruin of an old fortress on the property, whose ancient name was Cásar Uellenni. Presumably either the explorer's father or mother has connections to Cár Gouelen. "Kerguelen" is fine for the French name of the place (gouélen is a common borrowing among northern French dialects for gull). Perhaps "guélen" is the Francien form. For that matter, "car" is not unknown in the dialects east of Brehun. Elemtilas 03:14, 17 January 2010 (UTC)