Henry VII of England and Scotland 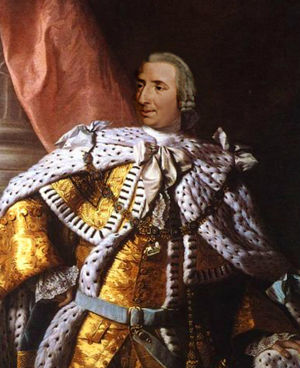 Henry Thomas Francis Stuart aka Henry VII (born 1725) was the younger brother of Charles III and succeeded him upon his death in 1790. A scholarly and polite man, he became personally popular for his moral lifestyle, including the fact he kept no mistresses and engaged in neither gambling nor drunkenness. In some ways he was the precursor of the so-called "Victorian" sensibility and manners.

Henry, Duke of York, wed Anne Claudine Louise d'Arpajon (1729-1780), the daughter of Marquis d'Arpajon-sur-Cère, in the year 1753, said marriage having been arranged by his grandfather, James IV and VIII. Many of his in-laws were to perish in the French Revolution. Some have suggested the King's deeply personal reaction the Reign of Terror as well as Napoleon's Empire may have stemmed from this fact.

His reign proved a tumultuous one, not least for the beginning of the Napoleonic Wars and the creation of the North American League. A more thorny problem was the succession, in that many in both England and Scotland viewed his heiress Mary with suspicion, especially given her marriage to Costenhin XII of Kemr.

King Henry tried to strengthen Mary's position with, among other things, persuading Parliaments of both nations to formally renounce the principals of Salic Law (which many pointed out should have been superfluous given the reign of Queen Mary I.

In the end it did little good, since the royal couple were eventually forced to abdicate anyway.

Henry's reign also saw the more-or-less formalization of the rules of cadency for the royal family of England and Scotland.