Andrew Jan Volstead graduated from St. Olaf's College in Casamir and became a prominent attorney. Of Norwegian background, he was elected to the Senate in 1885 in a landslide for the Conservative Democrats. A total teetolar, he was a strong advocate of Prohibition. Upon the unexpected death of General Moderator Sir Alfred Laurier, Volstead as President (a mostly honorary position) assumed office. He did all in his power, along with his ally and successor Jeremiah Jennings Bryan to pass a League-wide ban on the sale, importation and manufacture of whiskey. They were successful and the National Prohibition Act of 1916 was passed with a slim majority (although the Prohibitionists had to accept certain compromises--such as the legality of wines for religious purposes, as well as beers and ciders below a certain alchohol content, and whiskey itself could still be prescribed by a doctor). 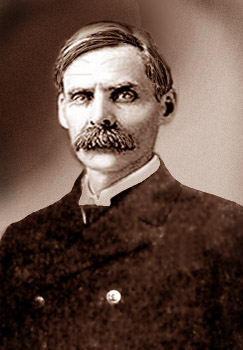 Prohibition was later repealed during the adminstration of Franklin Donald Rosenberg in 1932. While it lasted, it proved a huge windfall for organized crime--a fact that, while never making Volstead question Prohibition, did sadden him and may have led to bouts of depression.

In some ways even more controversial was Volstead's lacklustre response to the First Great War, including his initial refusal to institute the draft and very cool reception he gave ambassadors from the Federated Kingdoms. It was pointed out by many at the time that Volstead apparently had mixed loyalties, given the fact that the Scandinavian Realm was on the side of the Central Powers opposed to the Allied Powers. He left office in 1916 amid accusations of treason, mere weeks after what he had viewed as his greatest triumph, Prohibition.

Volstead was re-elected to the Senate, but found his influence much diminished. He retired to a private law practice back in New Sweden. A life-long bachelor, he had become something of a recluse after retiring and refused several requests for interviews in the wake of Prohibition's repeal.