I am back now.

I would assume out of 81 seats they would be shared in this way:

Notes - recession in Vilnija led to people's turning away from parties that were ruling there; while the good performance of liberals in Samogitia led to their election to national parliament as well. Volhynians sticks to Ukrainean party due to the successful referendum and such which they sees as success of that party, while Belarussians, despite being a larger minority, are less united; leftist parties were popular in the Belarusian inhabitted areas; a turn leftwards was as well noticeable in Vilnija, although many there still voted traditionally for the conservative parties. Samogitia remained pro-liberal, but support for the liberals was lower than in the provincial elections - perhaps due to relatively slower pace of the reforms now. However, liberals took some of votes from other rightist parties; New Democratic Union took some from the Liberaldemocrats, who, despite also being in the ruling coalition of Samogitia, generally are less pro-reform. In the regional seimas, many parties that had only one person to be elected won that seat in those constituencies where the leader of the party, generally the main spokesman and thus the most popular person of minor parties and frequently their founder, candidated. In some cases those seats were won in only constituencies wher ethose parties are popular, e.g. Christian Democrats won a seat in the Venedic inhabitted part of Suslewia, Samogitian People's Party - in central Samogitia, where most supporters of the Samogitian national identity lives, and such. Abdul-aziz 13:03, 22 January 2006 (PST)

Great, thanks you! And welcome back! As you can see, I've implemented your figures.
With one small exception... Instead of a total of 81 seats in the first section, I counted 83. So I took the liberty to take away one seat from the LSDDP and one from the DS. If you disagree with that solution, then feel free to change that.
Cheers, —IJzeren Jan Uszkiełtu? 01:10, 23 January 2006 (PST)

When the name of new chancellor will be known? (I’m assuming that chancellor Sacz did not change the party and now he is in opostion) Follow by white rabbit 05:00, 4 March 2006 (PST)

Oh, he has been known for quite a while already. I should finally get around to writing the news article in question. Anyway, his name is Marek Aldendorf, former army general and former commander-in-chief of the RTC's armed forces in Florida. —IJzeren Jan Uszkiełtu? 11:39, 4 March 2006 (PST) 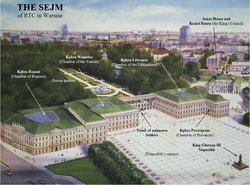 I was wandering where such huge parliament like “Sejm” would be locate and where to find such huge building witch would be able to contain all the chambers. And I found it! This building *here* is planed to be rebuild. What do you think abut this? Follow by white rabbit 02:17, 12 March 2006 (PST)

Wow! It's excellent! Let's have it!
Which building is it? I can't associate it somehow with on of the existing buildings I have seen.
I've only two minor qualms:
For the rest, wonderful work! —IJzeren Jan Uszkiełtu? 04:03, 12 March 2006 (PST)

As I mentioned before it is project. For those how were in *here* Warsaw – this is the Saxon Palace, bowled up by Germans after the Warsaw Uprising. For more than 10 years there have been plans to rebuild the rest of the palace (only Tomb of unknown solder survived to ours time). But in recent times all the contest were cancel because they (Warsaw government) found old plans in central military archive. Summing up – this is a formal project of one of the company how wanted to rebuild the palace. I found it in Google and then in architectonic forum. I have no idea how it is copyrighted but I assuming there won’t be any problems, especially when I made changes. BTW those photo of Nowy Mąd is GNU/GPL. Follow by white rabbit 11:27, 12 March 2006 (PST)