Dr. Paul Erdmann Isert (1756-1789) was a German botanist and surgeon. Isert was born in Brandenburg, but educated in Denmark. He was the first scientist to identify the Violet Turaco, Musophaga violacea. But he is better known for starting the movement to end the slave trade in Guinea.

He was appointed Chief Surgeon to Christiansborg (Akra) in Danish Guinea, arriving there in 1783. He obtained this position even though he was very young, because it was a job no one wanted.

After a few years in Christiansborg, Isert signed on as a physician aboard a slave ship. En route from Guinea, on the second day at sea, he witnessed a slave rebellion on the open sea, which almost cost him his life. The cargo of 452 blacks rose against the whites, with a resulting loss of 34 of their number and 2 of the crew wounded after a heated battle. In the West Indies, he visited St. Croix, St. Thomas, St. John, Guadeloupe and Martinique.

Sickened by the horror and human misery he saw, both in the slave-processing bins of Christiansborg and aboard the ship, Isert came up with an alternative to the abhorrent practice of slavery.

Following the discovery of the New World, Europeans came to the West Indies in order to make their fortunes as masters of plantations exporting valuable tropical products. These West Indian plantations required a great number of laborers. Unfortunately, Europeans were ill-suited to labouring in the tropical climate, and so slaves were imported.

Guineans, captured by slave traders, were brought to European slave-processing stations in Guinea. These unfortunates were then crammed into slave ships under the most horrible conditions imaginable, and transported across thousands of miles of ocean to labour in a strange land controlled by cruel overseers.

Isert found this state of affairs not only inhumane, cruel and immoral, but also absurdly stupid. In a letter sent from St. Croix in 1787 to his father, Isert asked these questions:

"Why did our forefathers not have the sense to found plantations right there on the fertile continent of Africa; plantations for sugar, coffee, cacao, cotton and other articles that had become so necessary in Europe.

"Had we gone to Africa with the leaf of the olive tree in our hands rather than weapons of murder, willingly would the natives have given us access to the best and most fertile parts of their lands, areas which for untold years had been lying desolate. Why was not our approach more Christian, more intelligent and humane? Why?

"These African people would have helped us in freedom and, for low wages would have given us greatness and riches with no offense against nature, or our personal and national consciences.

"Why did we have to uproot vast numbers of people from their homelands, subject them to agony, torture, humiliation, and death; transplant them to alien continents, Caribbean islands, big and small? Why?"

Isert wanted to demonstrate that the establishment of working plantations on the continent of Africa could be practical and profitable. To this end, he enlisted the aid of Ernest Schimmelmann, who was then the Danish-Norwegian Minister of Finance. Schimmelmann, a well-known and well-off liberal, who was instrumental in the passage of the law ending the Danish-Norwegian slave trade, agreed to finance Isert's endeavor.

In 1788, Isert published his famous book Reise nach Guinea und den Caribäischen Inseln in Columbia (Journey to Guinea and the Caribbean Islands in Columbia), wherein he described his experiences with and his views on the slave trade. Later in the summer, he sailed for Africa and established a crown plantation, Frederiksnopel, in the fertile and cool Akwapim Hills reminiscent of the Mediterranean, purchasing the land from the Akwapim chief, Nana Obuobi Atiemo, on behalf of the king of Denmark. Isert had once tended the cheif's sister and subsequently the African and the European had become good friends.

With the help of Nana Obuobi Atiemo, who shared Isert's enthusiasm about the plan, paid workers cleared the land and began cultivation of sugar and coffee.

On January 16, 1789, Isert wrote a report to the King of Denmark in which he expressed the fine initial success that he was enjoying. Isert and his family died on January 21, 1789, just five days after writing the report.

At first it was believed that Isert had passed away from a tropical fever. However, it was later revealed that he had been murdered in a conspiracy that was instigated by Austro-Dalmatian financiers of the slave trade. Isert's actual assassination was said to have been carried out by corrupt government officials at Christiansborg and their henchmen.

Isert's assistants attempted to carry on the project at Frederiksnopel and even founded less successful plantations on the rather barren plain between Akra and the hills, as well in at the hot estuary of the Volta river. 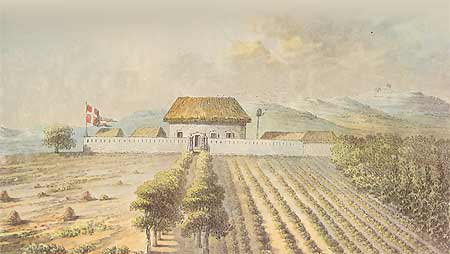 Plantation "Frederikssted" of the early 1790s

Frederiksnopel was given up after about a decade due to the threat of Ashanti attacks.

In 1792, Denmark-Norway, as the first, declared the slave-trade illegal.