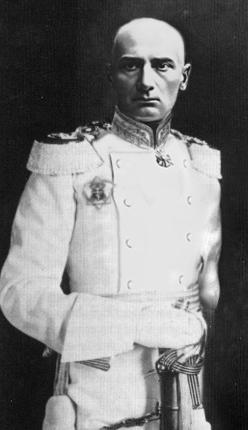 Admiral Aleksandr Vasilyevich Kolchak (Александр Васильевич Колчак in Russian) was born in 1872. He joined the Russian Navy and became a national hero during the Russo-Japanese War. During the First Great War he carried out successful operations in the Baltic and in August 1916 he was given command of the Black Sea Fleet. However, he resigned from office after Kerensky's Provisional Government came to power in March, 1917. After the Bolsheviks gained power after the October Revolution, Kolchak became War Minister in the Provisional All-Russian Government based in Omsk, shortly after which he overthrew the government and imposed himself as Supreme Ruler.

When the so-called White Armies defeated the Bolsheviks early 1919, Kolchak became a member of the new ruling body, the White Council, whose purpose was returning power to the czar and acting as a provisional government. After the death in the same year of general Lavr Kornilov, the chairman of the council, Kolchak succeeded him. It was Kolchak who turned the White Council into a strongly nationalist military junta, and it was also Kolchak who in 1923 - along with the other members of the Council (Anton Denikin, Nikolai Yudenich and Petr Vrangel) founded the SNOR as a political mass-organisation. Thus he transformed Russia into a totalitarian, single-party state.

In his capacity as leader of the SNOR and chairman of the White Council, Kolchak carried the title Supreme Leader of the Russian People. He died in 1937 of natural causes, and was succeeded by Iosif Vissarionov.

Already during his life, a vivid personality cult around Kolchak developed. After his death, this cult became even stronger, to the point that he had reached an almost legendary status. All kinds of stories were told about his almost superhuman qualities. Among the less spectacular myths about Kolchak was the assumption that he could speak over forty languages fluently; in reality, he knew only Russian. In all the periods of SNOR rule over Russia, several leaders openly denounced their predecessors and opened the files about their crimes, but no one ever dared to criticize Kolchak. His portraits have always been all over the country, and even after the fall of the SNOR, many believe that things would have been different if not Vissarionov but someone else had succeeded Kolchak.

Porfiri Bogolyubov, the SNOR leader, patriarch and self-appointed czar who ruled Russia in the years 1977-1984, sanctified Kolchak by decree in 1980. That decision was reversed only in the 1990s.