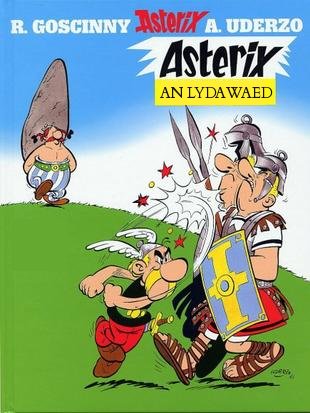 Asterix (Francien: Astérix) is a fictional character, created in 1959 as the hero of a series of French comic books by René Goscinny (stories) and Albert Uderzo (illustrations). Uderzo has continued the series since the death of Goscinny in 1977. The books have been translated into many languages (even Latin and ancient Greek) and are available in most countries. It is probably the most popular French comic in the world; probably, in most parts of Europe, a majority of the adult population has read an Asterix book at some point in their life.

The key to the success of the series is that it contains comic elements for all ages: young children like the fist-fights and other visual gags, while adults can appreciate the cleverness of the allusions and puns that sparkle throughout the texts.

Asterix lives around 50 BC in a fictional village in northwest Armorica. This village is celebrated amongst the Gauls as the only part of that country not yet conquered by Julius Caesar and his Roman legions. The inhabitants of the village gain superhuman strength by drinking a magic potion prepared by the druid Panoramix. The village is surrounded by the ocean on one side, and four Roman garrisons on the other, intended to keep a watchful eye and ensure that the Gauls do not get up to mischief.

A recurring plot in many of the Asterix books concerns the attempts by the Romans to prevent the druid from making the potion, or trying to get the secret recipe for their own use. Such attempts are invariably foiled by the heroes of the Asterix books, the agile, clever and pint-sized Asterix and his clumsy, oversized, but good-hearted best friend, Obelix.

The humour encountered in the Asterix comics is typically French, often centring on puns, caricatures, and tongue-in-cheek stereotypes of contemporary European nations and French regions. Much of the humour in the initial Asterix books was French-specific, which delayed the translation of the book into other languages for fear of losing the joke and the spirit of the story. The newer albums share a more universal humour, both written and visual.

In spite of (or perhaps because of) this stereotyping and notwithstanding some alleged streaks of French chauvinism, it has been very well received by European and Francophone cultures around the world.

Everywhere they visit, Asterix and Obelix encounter people and things borrowed and caricatured from 20th century real life. In the early album Asterix and the Goths, for instance, the Goths are represented as militaristic and regimented, reminiscent of late nineteenth and early twentieth century Germans. The helmets worn by these Goths even resemble the German Pickelhaube helmets and one of their leaders bears an uncanny resemblance to Otto von Bismarck. The English are shown as polite and phlegmatic, drinking warm beer or hot water (before the first tea has been brought to what would become England by Asterix); they boil all their food and serve it with mint sauce. Spain is the cheap country down south where people from the North go on holiday (and demand to eat the same food as they are used to at home).

Some caricatures of the traits of certain French regions are also used: the people from Normandy smother their food in cream and cannot give a straight answer; the Gaulhoscs from Marseille play boules and exaggerate matters, and Corsicans don't like to do any work, are easily angered and have long-standing vendettas that they settle violently, and make cheese that smells so bad that it actually becomes an explosive.

Other side characters allude to people related to the place Asterix is visiting. Notable examples include a pair of Belgian warriors in Asterix in Belgium who resemble Thomson and Thompson of Tintin-fame, and both Don Quixote and Sancho Panza are depicted in Asterix in Spain.

However, in many other respects the series reflects life in the 1st century BC fairly accurately for the medium. For example, the multi-storied apartments in Rome—the insulae—which have Obelix remarking that one man's roof is another man's floor and consequently "These Romans are crazy": his favourite line. This line itself is also an intrinsic joke on Rome and the Romans: its Italian equivalent being "Sono pazzi questi romani" abbreviates as "SPQR", which is the motto of the Roman Empire. On the other hand, though, the presence of chimneys in the Gaullic huts is not accurate, as they used gabled openings in the roof to let smoke escape; and menhirs are now believed to have been erected long before the Gauls.

The text also makes relatively regular use of original Latin proverbs and phrases, and allusions to Julius Caesar's De Bello Gallico. Some jokes are made about Caesar's use of the third person to write about himself.

Asterix in Other Languages

The adventures of Asterix have been translated into over 80 languages and dialects. A choice of translations into the various languages: