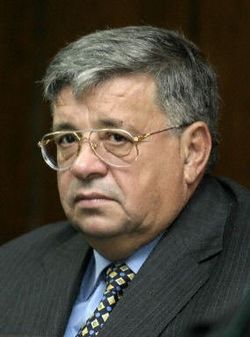 Leoń Rywiń, Venedised Ukrainian Jew born in 1945 as Лів Ривінь (Liv Ryvin’) in a small Galician village is a well known RTC’s lobbist, investor, celebrity, film producer and hero of one of the loudest corrupt scandals of the last 20 years. Rywiń has worked for many years for TWW, the state-controlled television, and after the liberalization of the media law in the early 1980’s he started his own business as a film and TV producer. His company “Rzodtać Filmie” yielded a lot of profit, making him one of the richest men in the RTC.

Shady businesses and agreements between politicians businessmen and sometimes even criminals, contributing in the law limits were always part of the RTC's political life folklore. There is a general opinion among citizens of the Republic that legislation process in their state gives a lot of opportunities for abuse. Some times one statute coming from Kębra Wenedór (Chamber of Veneds) or Kębra Litwanór (Chamber of the Lithuanians) to the Senate and Kuziel Rzeżu (the King's Council), through five chambers of the Sejm change not only the particular lines and future law consequences but also the essential meaning or even the title. But the core of this swindle was changing only two words in new Sejm statue containing propositions of new law preventing the concentration of different types of electronic and traditional media (especially newspapers and magazines) banning the creation of big and centralized mass-media holdings.

Rywiń's role was a quite simple. Having good contacts with the left wing of Veneda's political scene, especially with OLD – Olęca Lewie Demokratczej (Alliance of Democratic Left), he came to the owner FUR company and editor of Gazeta Jeleconała Adam Szkutyniek and offer him that this party could slightly change statute text enabling buying TV channel or radio station with pan-national range for current owners of daily newspapers like his, but not for editors or owners of other periodical magazines. Future Szkutyniek clamed that there were two meetings like that and the second one had been recorded on a tape by hidden microphone in his office. The whole scandal saw the day light haft year later, when one of the Gazeta’s journalist wrote an article “Jębława Rywiń o Szkutyńku” (Rywiń is comming to Szkutyniek) of course in Szkutyniek order. This had truly opened a Pandora box, because later a special Sejm commission found that “somewhere and somehow” two key words “u żurnali” (or magazines) had in fact disappeared from the statute text changing its meaning unnoticeable but significantly.

The so called “Rywiń commission” finally accused many of the OLD leaders and Rywiń of pay protection (corruption). Leoń Rywiń was sentenced for five year inprisonment for pay protection (later the appellation court changed the charges to fraud, and the sentence to three years inprisonment) denying of anything. Currently Leoń Rywiń is applying to King Witold for Pardon, motivating poor health condition and unprofessional prison hospital stuff. In the last general elections all old OLD leaders were replaced by young activists (the chairman Leszkieł Müller was replaced by young landowner Wójt Olanik).