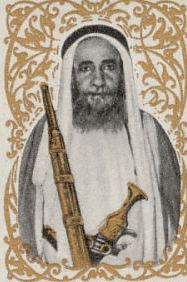 Ibrahim bin Hussayn (in Arabic: ابراهيم بن حسين) was born in Mecca, Hijaaz, in 1886. He was son of the Grand Sharif of Mecca, Hussein bin Ali, and younger brother of the future king Faisal I.

He followed Faisal in the Arab Rebellion of 1916-18 and when the independence of Hijaaz was proclaimed (1918) Ibrahim became the ambassador for the new Hashemite kingdom in London, England, and developed a close relation with the Federated Kingdoms.

The king left to his new realm to pacify it and called his brother back from London to help in the administration of Iraaq. Ibrahim was then nominated as prime-minister of this new kingdom.

Measures used to pacify Iraaq were brutal and such pacification was finally achieved in 1927, after the discovery of oil. Faisal I and Ibrahim granted oil concessions to local Iraaqi leaders to buy their loyalty, which made everyone involved quite wealthy.

With the death of the king by poisoning in 1933, his son Ghazi succeeded him as Ghazi I but kept Ibrahim as prime-minister. But the relationship between them became troubled after Ghazi accused foreigners of killing Faisal I and expelling all foreign advisors from the Hashemite kingdoms.

After Ghazi’s visit to SNORist Russia, in 1935, he decided to install in Iraaq a SNORist inspired government and called Russian advisors to help him in his purposes. Ibrahim tremendously disliked this, as Russia was turning more and more anti-FK at the time. As result Ibrahim stepped down from office in a complete fury and returned to Hijaaz.

During his stay in Hijaaz Ibrahim kept a low profile. Disliking the events in Iraaq he kept in secret contacts with non-SNORist people who little by little infiltrated many institutions of Iraaqi power.

Ghazi I died mysteriously on the 9th April 1939, on a airship crash. His four year old son, Faisal, became king of both Hashemite kingdoms, as well as the new grand Sharif of Mecca. At that time he was the wealthiest child in the entire world.

Ibrahim promptly proclaimed himself regent of Hijaaz which was well accepted by local population with whom the Hashemites were popular. In Iraaq the situation was not so simple. As the Ba’ath party ruled over Iraaq and had close connections to Russia, they had chosen their own regent, prime-minister General Sayyad Ali el-Keilany.

But Ibrahim activated his followers who had infiltrated Iraaq's institutions and on the 15th April in a master piece of synchronisation they decapitated the whole Ba’ath Party leadership, more than one hundred ranking members were caught and executed (many of them were actually having their heads cut off) including el-Keilany. After that Ibrahim was proclaimed regent of Iraaq which was well accepted by many who disliked SNORism.

Having Hijaaz under control and loyal Ibrahim left for Iraaq where he worked to dismantle the Ba’ath and persecuted everyone who might be a danger to his rule. Repression against communists, pan-arabists, republicans and SNORists included much brutality and soon he became unpopular. These persecutions would last until the end of regency and are calculated to have involved more than 200,000 murders.

In 1943 Ibrahim proclaimed himself crown prince of the Hashemite House as the very young king as yet had no descendants.

During the Second Great War Ibrahim proclaimed the neutrality of both realms but always kept close relations to the Allied Powers. In fact Iraaq became the most important oil supplier of the Federated Kingdoms.

In 1949 he signed in name of both Hijaaz and Iraaq the Treaty of Alexandria which created the Arab Community.

Knowing the importance of oil to then world Ibrahim made contacts with several oil producing countries in order to establish an organisation to control the oil prices.

In 1951 together with general Mossaddegh, chief of State Government of Persia, Adbul Aziz al-Saud, king of Saudi Arabia, and Maria Luisa, queen of Tejas they created the Community of Petrol-Exporting Nations (COPEN) by the Treaty of Baghdaad. Soon other oil producing countries would join this organization.

Prime Minister again and his fall

Faisal II reached majority on the 12th May 1953 and regency ended. But Ibrahim, who always had a strong influence over the young king, became again prime-minister of Iraaq. Ibrahim pursued his oppressive policies there as Pan-Arabism was gaining strength amid the population. Also recent events in Egypt (the proclamation of the republic by Gamal Abdel Nasser one year before) and later in Syria (the election of a pan-arabist president in 1955, Shukri al-Kuwatli) gave new reasons to Ibrahim to fear such events could “contaminate” the Iraaqi population.

He had reason to fear. On the 14th July 1958 a coup led by General Abdul Karim Qassim deposed the Hashemites in Iraaq. All royal family who were in Baghdaad at that time were executed, including King Faisal II, his wife the Queen Noor and others. Ibrahim tried to hide but was discovered in Baghdaad by a crowd of PanArabic Patriots. The former ruler was in effect lynched--savagely beaten, hanged and his corpse burned in the square in front of royal palace on the 16th July.